Among the various prizes and music support systems that exist in France and which help emerging independent artists to develop their audience & music, there is the Prix Ricard Live Music, which celebrates its 13th year of existence in 2022. The award takes place online and is divided in three main steps – the first being the auditions of course – and one of the most anticipated steps of the three is when they unveil the top 100… and the 100 names have been revealed on January 12th ! Let’s dive into how the support system works ands, as a bonus, we will unveil who is part of our top 10. 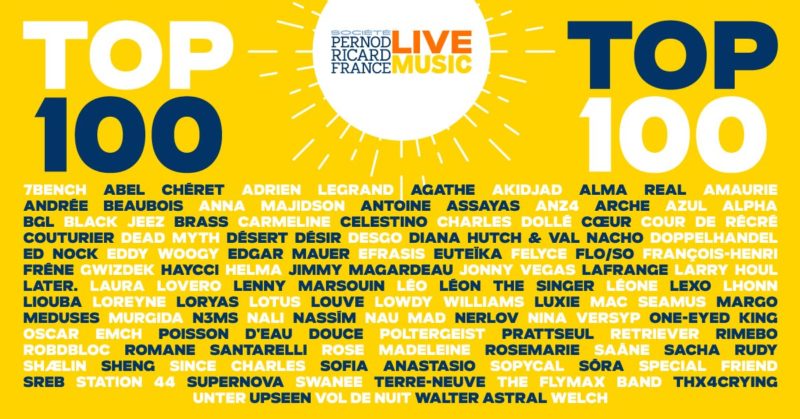 The Prix Ricard Live Music is known for having casted a light on then emerging talents of the electronic scene – artists like Irène Drésel but also Oklou or LAAKE, to only name a few – and, throughout the years, the prize has also supported new names that make the French scene as promising and diverse as possible, with artists such as Suzane, Mai Lan, Alice et moi, Isaac Delusion, Jabberwocky, Odezenne and more. And this year’s top 100 is as eclectic as it can be, as rap, electronic, folk, electro and acoustic pop and even rock music are being represented.

Last year, it was the rap & neo-soul artist called Dirsta who was crowned by a jury made up of various members of the music industry ; this year, the jury is composed of the new director of the French division of Epic Records Pauline Duarte, the photographer Charlotte Abramow who got famous for her series of pictures with the singer Angèle, Vincent Arniaud, manager of the Delta Festival or Thomas Guisgand, host of the French YouTube series “Journal du Rap” by Booska-P. As for this year’s partners, there are all allies of the emerging and independent music scene. We count among them Groover and Spinnup, as well as the new National Music Center (CNM) and Studio des Variétés.

The Prix Ricard Live Music gives the winner access to a 360 support system, allowing them to develop all of the key aspects of their emerging career. It includes live & tour support via the Pernot Ricard France Live Sessions tour, but also support regarding music recording and promotion around an EP release. On top of that, the winner will be helped and guided through the music industry through training sessions with IRMA and the Studio des Variétés – two renowned professional structures of the French music industry.

It was hard to make our choices between this extensive artist selection, especially since it represents lots of very promising talents of the French music scene. Our top 10 is not ranked in any particular order… apart from the alphabetical one.

We talked about her on the magazine last year : Anna Majidson, who is half of the ex French duo named Haute, made her debut on the French and international independent pop music scene a few months ago. We particularly remember her first EP called “Mixtape Telecom”, on which is featured the excellent song named “echo”, a duo with the artist who needs no introduction anymore : November Ultra. She surprised us when she decided to switch from pop electro to a calmer form of folk music, but we could only but approve of it, especially since she also has the ability to sing in English as well as in French with unparalleled ease. In other words : her presence in the top 100 seems obvious to us !

Antoine Assayas has already been spotted for his English-speaking electro-house tracks by another music prize called the BPM Contest, which has been awarding an electronic music artist each year for the past ten years… this year having been a exception because three winners won the grand prize. His presence in the BPM Contest was more than justified, and we wish him success in the race for the Prix Ricard Live Music 2022. We let you discover his latest music video to appreciate his many talents !

About the BPM Contest : The BPM Contest is back with its selection for 2021 and will be showing it off on Clubbing TV from September 27th to October 9th !

Although this nickname suggests that it is the alter-ego of a male artist, Edgar Mauer is actually the music project of a young female artist whose music builds into melancholic electro pop songs, and whose singular voice catches our entire attention as soon as we get to hear it. It’s hard not to think of artists like Lykke Li when you hear her voice ; closed eyes are required to appreciate the wonders of the soundscapes she creates. A raw talent that we would like to see rise to the top !

Since we are deeply captivated by mesmerizing, bewitching voices here at hauméa, it’s hard not to add Felyce to our top 10. Her vocal range is wide and sounds absolutely ethereal ; yet, she, who is influenced by iconic artists such as Amy Winehouse or Lana Del Rey, has decided not to talk into their footsteps musically speaking. Indeed, her music is a mix between electronic pop and some light trap influences, a mix as fresh as it is comforting ; a tour de force that we cheerfully support !

If there’s one band enjoying incredible momentum right now, it’s Later. ! Promoted by French astronaut Thomas Pesquet who listened to them in the International Space Station – yes, you read it well ! – they are currently being aired on several French radio stations. With such support, the band is slowly making its way towards the bigger names of the French music scene. And their success is understandable : the neo-soul voice of the singer, which somewhat reminds us of that of Victor Solf, is supported by melodies that sway between pop-folk and lo-fi beats. Listen to one of their live sessions below to appreciate the full extent of their music !

Raw voice, dark melodies and English lyrics : Loreyne’s music rules make her instantly stand out on the French music scene, and these are qualities that are heavily sought after. And in terms of music, even though she has only released one track so far, we didn’t need much else to be fully captivated by her talent and musical world. Loreyne is definitely the freest spirit of our top 10, and probably of all the hundred artists to be after the grand prize !

Among all of the female talents that are making their way onto the electronic music scene, there is an artist who will definitely become major in the upcoming months : her name is Romane Santarelli. She is known for her live shows and for the ease with which she interacts with her instruments, and she is also known for playing with another artist called Delayre in their music duo called Superamas. What’s her music style, you may ask ? It’s a delicate mix of throbbing electronic beats and deep techno. We leave you with a live session she has given for Neon last year for you to appreciate her many talents !

There are many artists who talk about love ; there are fewer artists who sing of melancholic and down-to-earth love, however. The artist called Terre-Neuve is however part of the latter category ; in his lyrics, he sings of the soul’s moods by describing the ocean’s waves, lyrics which are supported by catchy, club-esque light electronic pop beats. He is one of the few artists to represent Brittany in this top 100 ; we wish him to rank high in the top 100 in order to make it to the finals !

Those who have been following our magazine for a few months – and especially those who follow us on Spotify – know that we follow the emerging French pop scene very closely ; the project defended by the male artist Thx4Crying inevitably caught our attention, especially since it was strongly recommended to us by a duo we interviewed recently : Toboggan. Between solar electro pop and naive lyrics, Thx4Crying – whose name represents melancholy at its best – proudly represents the emotions that lie within us as well as the LGBTQIA+ community, and we hope to see him reach the final top 10 !

We end our top 10 by celebrating eclecticism with a music project that puts together a smooth male singing voice with bass-dominant club sounds… and whose music videos & visuals are made of animated, childish drawings – we warned you : they are eclectic ! We introduce you to Walter Astral’s project : a duo that stands out for its unusual and unique aspects. Some may hear the early days of Flavien Berger in their… and you won’t be the only ones ! Discover them below and support them in your top 10 too.

What about you, who has made it to your top 10 ? Don’t hesitate to tell us on Instagram !

You can vote for your top 10 and discover the rest of the artists on their website. You can also follow the contest on Instagram as well !