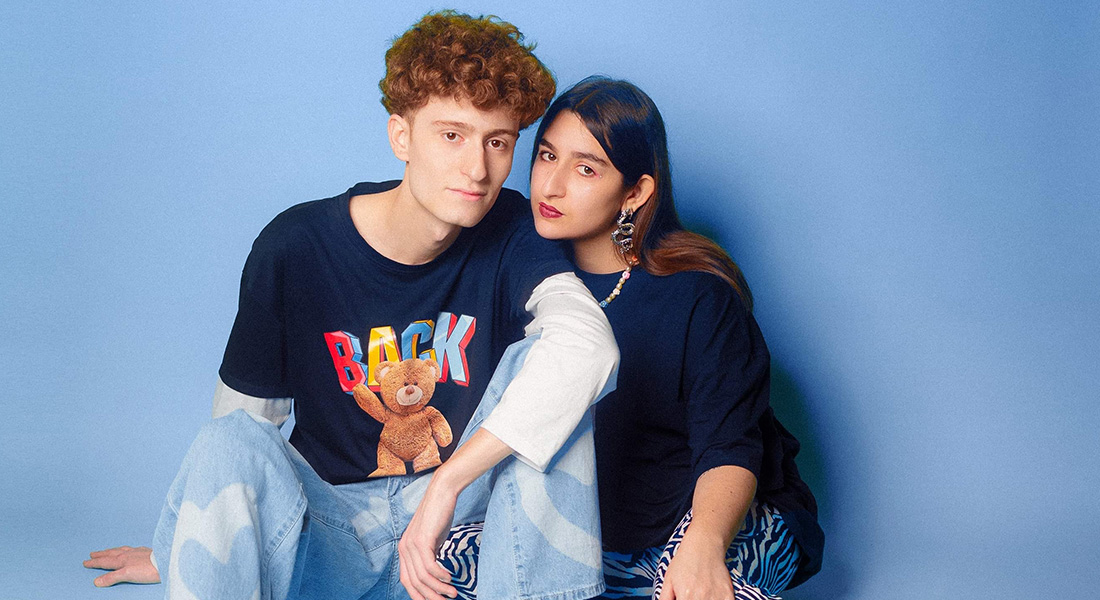 We have talked with Toboggan, an indie French duo that makes sweet retro songs for romantic minds

Sweet synth notes, 8-bit tones, lyrics filled with love stories, vintage aesthetics… this can speak to two totally different generations of people : those who lived their childhood in the 80s and those who lived in the 2000s. These aesthetics have made a strong comeback within the music industry these past few years and continue to move the hearts and minds of many emerging bands, and Toboggan is no exception. Heavily inspired by what we could call a retro universe & adolescent emotions that made everyone feel different at some point in their life, the duo expresses their fears, their joys and their many life experiences on soft synthetic melodies “in Molière’s language”, to quote their own words. In order to celebrate the release of their new single “Glace à la fraise” that has just been released, we have asked them a few questions to get to know them !

1. Hi Toboggan ! Thanks for accepting to answer our questions today. First of all, would you mind briefly introducing yourself to those who don’t know you yet ?

Hello Hauméa, thank you, we are very happy to answer them ! We’re Toboggan, we make synthetic pop for romantic people and we are signed to Pont Futur. We compose and sing in French and we just released a new single called “Glace à la fraise” (French for “Strawberry ice cream”).

2. You’ve made your musical debut only recently : your first single, entitled “Souvenirs Caraïbes” was released in 2019, so barely two years ago. Did you each have a solo career before making music together ?

I did some synth demos on Soundcloud under the alias saperli_paupiette_ and Quentin was very busy with his band called Anacortes. Toboggan is a bit of a mix of the two, we make light-hearted pop music with very characteristic synth sounds, always using Molière’s language.

3. And may I ask you why you chose “Toboggan” – French for “Slide” – as a pseudonym ? Is childhood a theme that particularly inspire you ?

Before we got to know each other we really liked to draw slides, and we both said on our own that if one day we had a group it would be great to call it Toboggan. It was a funny coincidence and something that sounded obvious for us. We are very happy with it because it represents our musical and visual universe pretty well. We have this philosophy of making music that is straightforward, innocent, naïve, and our name also works with our pop and colorful aesthetic.

4. To go even further in this direction, as you already know, we all have seen these past few years the comeback of retro, vintage, nostalgic aesthetics within the French pop music realm. You just have to take a look at bands like Grand Blanc and their track “Télévision”, Vidéoclub and their neon aesthetic or even singers like Chaton and their bittersweet words about today’s society to realize this. You too are inspired by this vintage aesthetic – what is it that attracts you, especially for you who are part of this so-called “millennial” generation ?

We are super inspired by the musical and visual universe of the 80s to 2000s, the pastel colors, the clothes, the aesthetics of the music videos, the very catchy & recognizable sounds etc. Our first reference and guideline is Elli and Jacno and retro kitsch love. We really like this way of making music : juggling between good and bad taste, going for super effective melodic lines, using very distinctive synth sounds… We also love pop the way it is today, so the idea is to mix and match the two.

Similar to Toboggan : After days of teasing on their socials, L’Impératrice unveils a surreal music video for their new single “Peur des Filles”.

5. And in order to affirm even more an already well-rounded musical & visual universe, today, you follow up your single “Dans le noir” (meaning : “In the dark”) with a track called “Glace à la fraise”, a typical French childhood dessert that you use as metaphor to describe love and its ups and downs throughout the track. Could you tell us more about what inspired the writing of these lyrics and more particularly their metaphorical aspect, almost abstract at times ?

We wanted to tell of the early beginnings of summer love stories and of the birth of sensual temptations through a pop ode filled with tenderness and sensuality. What’s better than a good strawberry ice cream, which is ephemeral and sweet, to illustrate these summer sensations ?

6. “Glace à la fraise” is a lot more playful than your previous releases, musically speaking ; the lyrics are however sadder, more on the melancholic side than what you have accustomed us to. Do you like to play with various ambiances in your tracks ? What do these contrasts mean to you ?

Yes, we love to play with these ambivalences. We like pop music when it is pushed to the max, with effective melodies… the type of tracks you fall in love with instantly. However, it is when these same musics offer a second narrative that goes a little deeper that they really get to us. Artists like Lola Le Lann or Clara Luciani are able to do exactly that, to combine a light & solar form of pop music with melancholy. We were very inspired from this tension that can exist between the lyrics and the music itself for this track.

7. I also wanted to talk about the lyric video ; it is true to the atmosphere of the track, it is colorful, sunny, a little dance even goes with the chorus… if we did not read the lyrics while listening to the song, we could believe the video was made for children. In my opinion, the drawings reinforce the happy yet sad atmosphere of the song : how did you choose the mood and the type of visuals for this music video ?

We really like to illustrate our projects with drawings and illustrations. We both draw a little, Quentin drew the video clip “Nuits sans toi” (meaning : “Nights without you”) on his own, we also reached new audiences with “Souvenirs Caraïbes” which was drawn by Anna Chwal. It’s kind of our trademark, it allows us to be more recognized easily among our peers and to unveil a little more of ourselves with each release. Here we wanted a solar and sweet visual, in order to match with the atmosphere of the song.

Want to listen to more French pop songs ? Go give our playlist #11 a listen !

8. Also, are you influenced in any type of way by the French pop scene ? I think we could easily compare you to a more indie and more intimate version of Videoclub, for example !

We are indeed very influenced by the current French scene. We are inspired by artists such as the Pirouettes, Lola Le Lann, Lewis OfMan, Flavien Berger …

9. Quick question, I’ve noticed that you are supported by a French record label called Pont Futur, which supports many French talents such as La Belle Vie or Refuge who recently featured Pijama on one of their songs. How did you sign with this label ?

We have known Pont Futur from the very beginning, it is a structure that has always caught our eye because we really like the artists who are part of it. We took advantage of the lockdown period to send them some demos of a future EP and that’s how we signed with the label. We are super proud to work alongside them.

10. I know you’ve just released a new track, but what can we expect from you in the upcoming weeks & months ? A music video for this track ? A few live performances ? Or something completely different ?

We are preparing a lot of great things this year. Music videos, collaborations, concerts… the next singles are music that is very close to our hearts, with a catchier vibe to them. We hope you’ll like it !

11. And finally, here’s a question that I like to end my interviews with : is there an artist that you are keeping an eye on lately ?

Cour de récré and Thx4crying are two artists we follow closely at the moment. We’ve been fans of their aesthetics and very admiring their ability to make something new out of old stuff. It’s super inspiring !