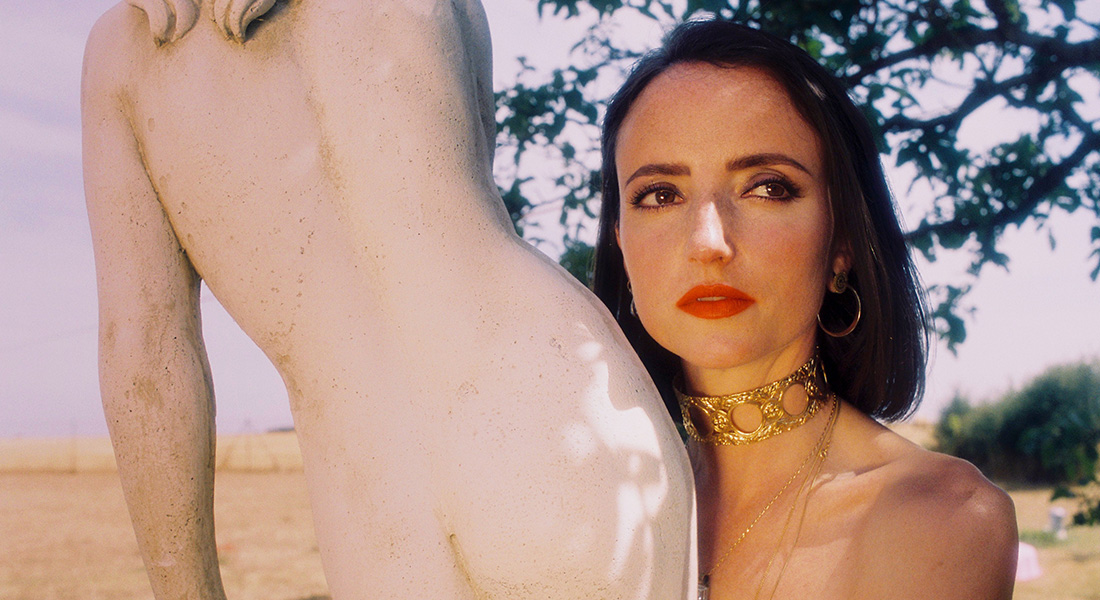 Irène Drésel welcomes us in the world of her future album “Kinky Dogma” !

Irène Drésel, a techno artist so easily recognizable for her sensual soundscapes as well as for the rose petals that both slowly became her signature. She has gained a lot of popularity within the French electronic scene thanks to her first EP “Rita” in 2017 ; two years later, she affirms her colorful and mystical universe with a first album called “Hyper Cristal”. Today, the producer and sound genius comes back with “Bienvenue” (which means “Welcome” in French), a track which announces both with grandeur and subtlety what’s to be expected in the next chapter of her music journey, entitled “Kinky Dogma”. The tracklist of her future album has just been partially unveiled in a hallucinogenic music video : let’s dive deep into the many references that are to be found in it.

When Irène Drésel releases something, she goes all the way ; the 5 minutes of the track and of the music video are indeed full of multiple references. If some of them remind us of the scenography of her live set, some others explicitly showcases the content of her future album as well as of her previous releases.

From the very beginning, Irène’s whispered voice welcoming us reminds us of her early debut and more specifically of her track “Rita”, in which she recites, backwards, a prayer from Saint Rita. In “Bienvenue”, however, the message appears to be clearer, and Irène invites us to take place in her world, an invitation that we gladly accept while still remaining very curious. Then, little by little, the sharp sounds induced by the synthesizers involuntarily remind us of the almost dissonant progressions of “Rajadamnern”, a track featured in her previous album. Should we therefore see “Kinky Dogma” as “Hyper Cristal”‘s sequel ?

It then only takes a short time to notice the fake tarot cards Irène Drésel is holding in her hands – hitting pause for a second gives us a glimpse of the numbers and titles of some of the future tracks of her upcoming album (which seems to be including “Stupre”, a single released a few months ago). But we will come back to this later.

Another thing that catches our attention is a detail that may be trivial : Sizo Del Givry, Irene Drésel’s percussionist, stands like a butler at her side the same way he performs to her left on stage. Until then, all of the music video’s setup seem to show us a fortune teller and her assistant, but it is when Irène Drésel draws the cards and chooses, one by one, which scientific vials her assistant has to smell and taste that things take a completely different turn. Indeed, Sizo Del Givry seems to react to the fumes coming out of the vials in a different way each time ; if the concoction associated with the card “01. Bienvenue” doesn’t seem to affect him much, the one associated with “06. Pinky” has him laughing uncontrollably. “02. Devotee” on the contrary makes him dance, and “04. Vestale” seems to have rather shocked him. We definitely want to see these aforementioned reactions as the emotions that these unreleased tracks are going to make us feel.

Finally, and this is where we will stop our analysis in order to let you enjoy the music video by yourself afterwards, one last thing that catches our eye is the color change that keeps happening by the window’s room. These hallucinations, which sometimes bear pink or purple hues, represent the person’s emotions under the effect of these scents, and they largely remind us of the colorimetry of some of her previous music videos, starting with that of “Je t’aime”, released on Valentine’s Day in 2020.

In short, Irène Drésel keeps surprising us with her visual universe, and especially with its singularity. Even though we can say she produces techno music, her music differs greatly from that of her peers, and all of the details that surround her tracks and music videos just keeps proving it. We now patiently wait for the release of “Kinky Dogma” while listening to “Bienvenue” on repeat !

Get to know more about the artist : Diving into Irène Drésel’s favorite tracks.

Irène Drésel is to be found on all streaming platforms. You can also follow her on Instagram !