There is no need to introduce her : in the French techno scene, people know who she is. Irène Drésel is the high priestess of sensual and progressive techno ; she seduces all of her fans with unparalleled levels of detail, either in each of her tracks or when she plays live – and she gave us a great performance in December, a very nice Christmas present from the artist and that we advise you to go watch it on our Facebook page. In the meantime, she is preparing beautiful things for 2021.

But how does Irène Drésel compose? And what does she listen to on a daily basis?

We asked her a few questions to find out more about what lies behind the roses that surround her every time she performs. 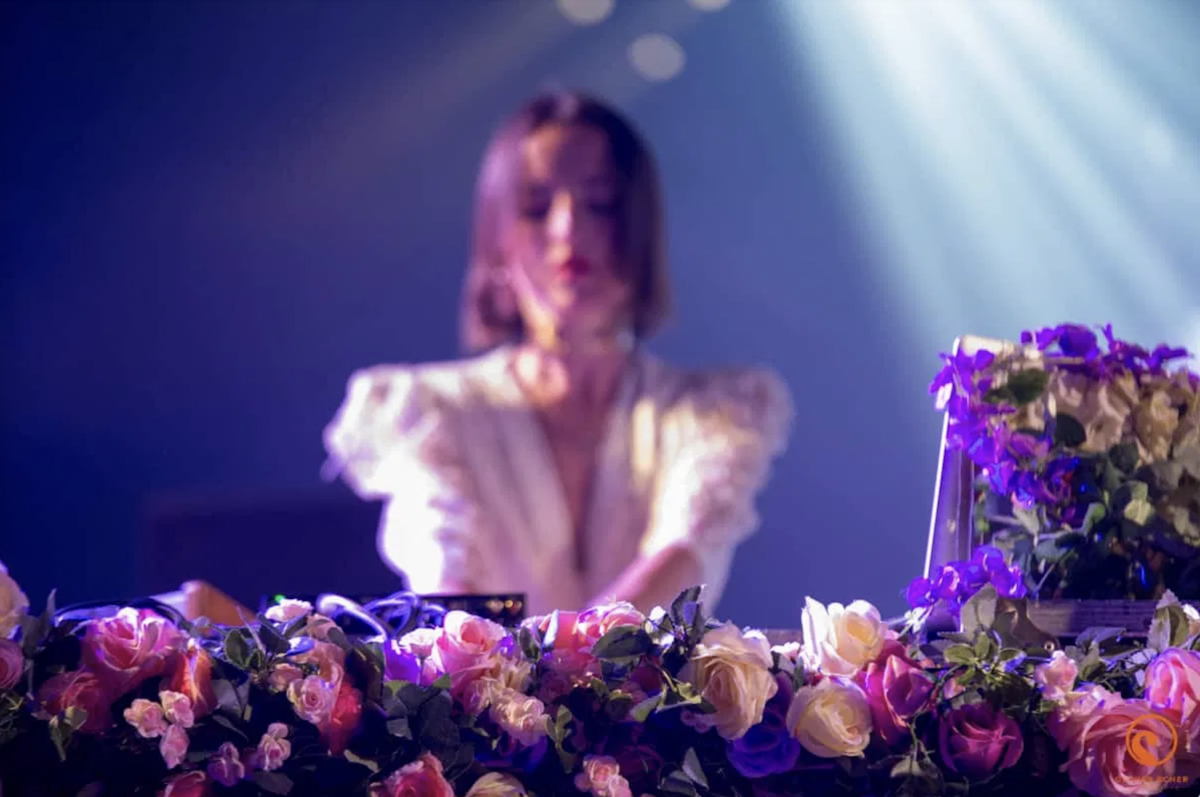 1. Can you briefly introduce yourself to those who do not know you yet?

Of course, my name is Irène Drésel, and I am an electronic music producer. My music has strong techno influences but also has a lot of melodies and emotional intensity. On stage I am surrounded by flowers, and that’s how people recognized me too 🙂

2. We all saw during your last live show that had this absolutely crazy scenography that you announced an album for the month of April ! Can you tell us more about how you composed this album and what awaits us ?

I started composing this album shortly after my first album was released. (“Hyper Cristal”, released in 2019). I’m very slow when it comes to producing, so releasing an album is a long process for me. It took five years to compose the first one, and for this one it has taken me almost two years. I composed it at home, in my studio, with milk chocolate, tea and lime / ginger flavored water :). When I compose I imagine a completely hysterical crowd and a sweaty atmosphere. This is what carries me. It’s an image and a feeling that keeps me going, despite the current situation. This album is diverse and rich, and remains close to the precedent one I released in 2019.

3. Those who follow your everyday life on Instagram know about the big garden that surrounds your house, the chickens you take care of, and your love for Hawaiian pizza, but I’m not sure people know what you listen to every day ! Can you give us a quick overview of the playlists you currently listen to ?

Aaahh! There is a very simple reason for this … I don’t listen to that much music ! So this is a very difficult question for me. I like what our dear Johnny Hallyday said, and he’s right, “I make music, so that’s why I don’t listen to it too much.” :). However, I recently created Spotify playlists which I started sharing on social media. I have this particular playlist that I  called “Electronic and Techno music that I love” that lasts five hours, and I have another one that’s called “Electronic music to make love in a perfect way” which lasts an hour and a half. Another one : “Relax and Sweet Dreams”, “Music in all languages”…

However, my six favorite songs are mostly songs from other cultures, like “Hela Lisa” by Bashar Mar-Khalifé, “Mae Kha Som Tam” by Onuma Singsiri, “Leyla” by Altin Gün, “Moner Atale Neme” by Sandhya Mukherjee. When it comes to techno, I have to mention Nathan Fake’s “Outhouse”. When it comes to rap, I’d choose “Daruma” from Nepal.

4. Can you tell us a little more about the tracks you just mentioned ? What do they mean to you ?

These are tracks that mean a lot to me because they carry a lot of emotion in them, and they really tell something. Onuma Singsiri’s “Mae Kha Som Tam” (a popular singer in Thailand) tells us of the plight and grief of a papaya salad seller at a Bangkok gas station. She is upset because she does not see her two regular customers coming. It’s late and she waits for them all night while watching the road, fearing that they have bought their food from another merchant. I love Thailand and this song reminds me of its warm atmosphere at night… Then there is “Moner Atale Neme” by Sandhya Mukherjee, it’s a Bengali song that I love. I discovered it in September 2012 during a trip to California. I had won a photography prize so I was invited to the opening at the San Diego Museum of Art (at the time I was doing photography). There I met an American friend of Indian origins, and her mother gave me the CD of this singer she adores – Sandhya Mukherjee. It’s exactly the type of music that brings me places and reminds me of a lot of things. As for “Daruma” from Nepal, it’s French rap this time, so it is completely different from the rest ! “Daruma” is a very dark and melancholic song. Nepal is a rapper who committed suicide in November 2019 at just 24 years old. I discovered this track the day after he died. It really moved me. The text begins with “I painted the sky the color of lavender, my mind in a diving helmet”. I get goosebumps and my hearts gets heavy every time I listen to it.

5. Finally, can you tell us which artist you are currently keeping an eye on ?

I like to follow the releases of Bonnie Banane, whom I discovered seven years ago (already!). Since she compares herself to Brigitte Fontaine, whom I had the chance to know very intimately, I like to look for similarities between them. I also like to follow the recent works of Salut C’est Cool or Jacques. Otherwise, the only artist I follow closely is Paul Kalkbrenner, because I’m waiting for him to drop bangers like in the good old days! Recently he released a new track, “Graf Zahl”, which is a good one ! But I have never found a song as strong as “Altes Kamuffel”, his 2012 hit. He’s going to have a kid soon, so I am convinced that this event will influence his music in great ways 😉

While we wait for Irène Drésel’s next album to come out in April, we invite you not only to listen to her first album, “Hyper Cristal”, but also to browse her Youtube channel and admire her hand-drawn music videos !

Irène Drésel is to be found on all streaming platforms. You can also follow her on Instagram !