We attended the European event that is the Crossroads Festival from the 7th to the 10th of September : here’s our festival report !

Among the great amount of festivals that took place in France since the beginning of September, we went to Roubaix, a small town located in the North of France in order to attend the sixth edition of the European music event called Crossroads Festival ! Were going to be hosted : lots of networking opportunities for both artists & music professionals, conferences around different themes such as developing an artistic career in Europe, but also workshops, band meetings… and close to thirty live performances by local independent artists as well as those of neighboring areas such as Germany, Belgium and Poland. A well-rounded program that we had to talk about ! Here is our festival report : get ready to both learn & make some great music discoveries ! 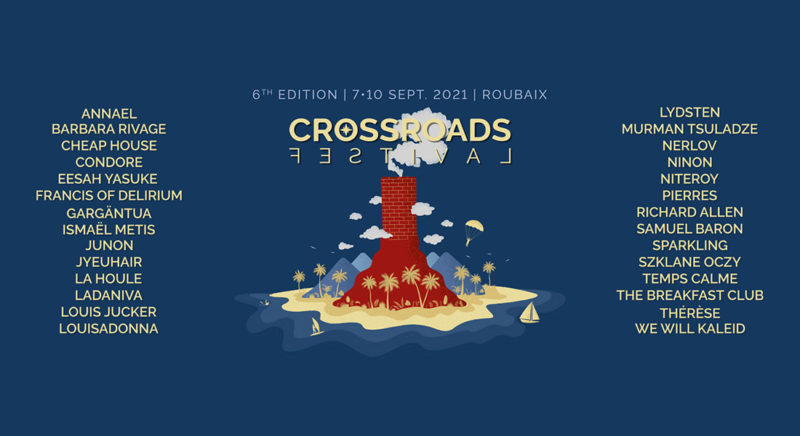 Crossroads by day : workshops & conferences on artistic development in areas such as the North of France, Belgium, but also Germany and Poland.

We recently told you about the main features of the event in a short news article : Crossroads Festival is a European event that welcomes nearly 30 artists every year as well as dozens of music professionals for conferences, workshops, meetings, concerts and more. As its names indicates it, the festival is to be seen as the meeting point that brings artists and music industry professionals together ; the festival gathers music professionals from the North of France and neighboring regions in Europe,  from Wallonia in Belgium, Westphalia in Germany and Voivodeship of Silesia in Poland.

While the first day of the Crossroads Festival was dedicated to a private meeting as well as to a tour de table dedicated to the law regarding noise regulations in Europe, the second day introduced us to the first step of a three-part program. The first part was meant to lift the veil on the European measures that exist to push artists’ projects as professional structures from the national to the European level, the second part was about artist support policies, and the third & last explained the various way local artists and music professionals could get financial support & grants from their region as well as from other public services. A great, well-thought out program that covered a lot of aspects regarding artistic development !

8th of September : a day dedicated to promoting music & culture in Europe

During this first day of meetings called “Kulturatrium”, we attended each & every one of the meetings organized by the Cultural Intervention Brigade and Haute Fidélité, a professional association dedicated to bringing together local music professionals and creating networking opportunities for them.

The first meeting consisted of a conference given by both the French Institute and the department of the French Music National Center (CNM) that is dedicated to promoting French talents abroad. They’ve discussed of the impact of the current health crisis as well as of the various emergency measures & how the CNM and the French Institute put them into action. They have also took the time to talk about the various networks and programs that allow both artists and professionals of the music industry to scale their project to a European level and thus benefit from the support of the EU, thanks to networks such as LiveDMA for live performance professionals, Europe Creative for music entrepreneurs, or On The Move for those who are in need of specific resources & data to better understand the European market.

This first meeting was then followed by the presentation of organizations that dedicate their work to supporting artistic creation in three European regions : Haute Fidélité for Hauts-de-France, PopNRW for the region of Westphalia in Germany, and Ars Cameralis for the region of Silesia in Poland. These three regions were brought together for their similarities in terms of environment for artistic and musical development.

During the afternoon, the Europe Creative program, which was only mentioned briefly during the first meeting in the morning, gets to be presented by various music associations like LiveDMA, Trempo as well as Confront, i.e. three companies that benefit of Europe Creative’s financial support. The three associations were to present the various mechanisms that this organization offers to support European development and federation projects – a focus on Music Moves Europe, a program of Europe Creative dedicated to the music sector, has also been introduced to the audience that attended the meeting. We got to learn that, in short, if you have a structural project involving several countries of the European Union and if you meet the criteria, support may be offered to you to carry out your project once you have been selected !

Finally, the day ends with a focus on the various grants that the French Institute offers to selected artists & projects that wish to promote French culture in the world. Thus, after presenting their key areas of development in the world, several programs such as IF Incontournable were presented and their criteria explained.

September 9th : a day of workshops and debates named “All Access Meeting” that allows professionals to discuss the specificities, similarities and differences of their respective jobs !

Certainly the most important time of the professional gatherings of the Crossroads Festival, the “All Access Meeting” day not only made it possible to cast a light on the main challenges induced by of the post-Covid era, but also to highlight the differences that may exist between some musical aesthetics regarding the development of artistic careers and visibility. While most of the focus of that day was placed on support systems that help artists perform live and work on their live performances, other related topics were also widely discussed !

The day begins with the broadcast of a documentary entitled “Tournée Générale”, a short film which, as its name suggests in French, insists on supporting artists that both wish to perform live and to become music professionals. The focus was both on the Hauts-de-France region and on Wallonia in Belgium in the documentary – professional associations such as the Flow (urban music and cultures), La Lune des Pirates (concert venue), Dynamo (an association helping musicians to make a living off their art), the Tour de Chauffe festival or even the 4AD and Trix venues in Belgium were able to showcase their expertise. These presentations were completed with testimonials from artists who have benefited from the support of these associations & venues. This documentary was a necessary warm-up to prepare us for the day ahead, since the people mentioned in the short film were attending the debates & conferences throughout the day and therefore were able to discuss what had been mentioned in the film !

Thus, following this documentary, we headed towards the workshop dedicated to highlighting the differences in artistic support measures in Belgium and France. While the platform named vi.be was able to expose how artists are supported & promoted in Wallonia, the local French public associations of Le Phare (Normandy), Grand Bureau (Aquitaine-Rhône Alpes), Tetris (Havre) as well as Haute Fidélité (Hauts-de-France) talked about the similarities of their professional programs… which, over the course of the day, made it possible to debate around social matters, such as equal representation of men and women in artistic projets, the use of quotas and the lack of representation of women. An enlightening debate which in the second part of the day made it possible to talk about the limits of these professional structures, and also to highlight the limits of live show support measures which do not apply to all musical aesthetics nowadays, especially since social media plays more and more of an impact on artists’ visibility.

To close the 6th edition of conferences and professional meetings, the Hauts-de-France region decided to mention the various aspects of financial support it offers to local cultural projects. The region has been able to show how its cultural budget has dramatically increased over the last 5 years, and was able as to confirm its future financial investments in artists’ professionalization projects and its desire to support independent local artists. After the region showcases its financial grant programs, Pôle Emploi and FONPEPS, two French financial public services, presented their respective programs.

In short, these four days were filled with interesting meetings, workshops and intense discussions which sometimes allowed important social debates to happen ; it goes without saying, the next meetings will most probably be just as enriching, if not more : with streaming services drastically changing how people listen & buy music and given how the pandemic changed how we attend live shows & support artists, it is easy to imagine that the topics that will be raised next year will give birth to many other debates ! 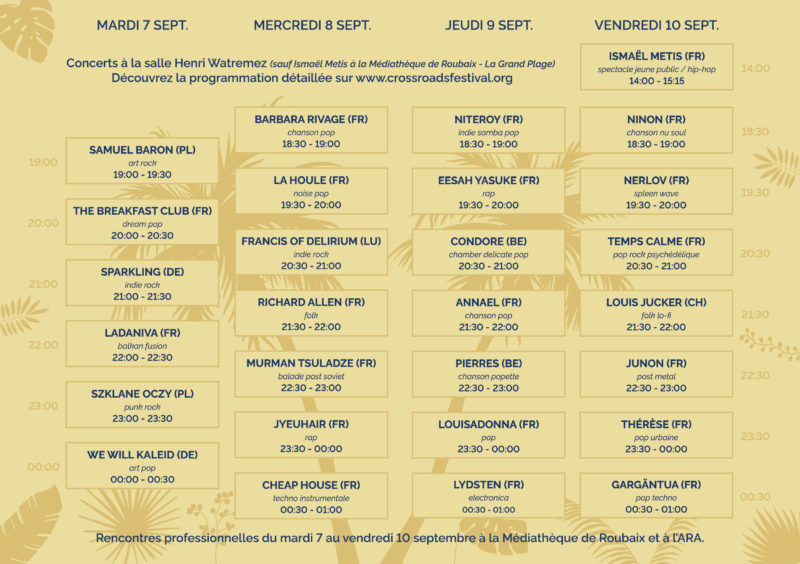 Crossroads by night : 28 local European artists share the stage of one of Roubaix’s local venue !

After having learnt, met and discussed with professionals from the local music industry, in the evening, we headed to the Watremez concert venue located in the center of the city of Roubaix and which hosted the concerts of this 6th edition of the Crossroads. On the menu : nearly thirty showcases lasting half an hour each ; 28 independent artists shared the stage over 4 days in this immense venue in Roubaix, adjoining that of the Cave aux Poètes, another venue that represents, among others, the young local urban, rap & hip-hop scene.

Among the live shows that got us hooked, we were hypnotized by the dream pop performance of the duo The Breakfast Club ; we were then bewitched by Ladaniva’s live, an Armenian singer who recently gained a whole new audience thanks to her featuring on one of Voyou’ latest track. A multilingual performance that we found to be far too short and that made us want to dance all night long !

If you liked The Breakfast Club, you’ll enjoy  : Talking with IOTA PHI, a multidisciplinary artist who’s more than ready to conquer the alternative pop music world

The following day gave us the opportunity to attend the live performances of Barbara Rivage and their raw French pop music filled with metaphorical lyrics, a performance that led to the rock music concerts of Francis Of Delirium, Richard Allen or La Houle, three live shows which were then followed by the electric performance of the Polish duo Murman Tsulazde !

The next day, Niteroy opened the show before letting the hypnotic rapper Eesah Yasuke express herself. We were then able to catch Thérèse’s special live performance given for Tsugi Radio between two performances ; we have to give honorable mentions to the most captivating sets of the evening : those of Annael, winner of this year’s Inouïs du Printemps de Bourges contest, as well as of Lydsten and his electronic live set which made us dance way past 1am.

Finally, the sixth edition of the Crossroads Festival ends with the pop soul performance of Ninon, the atmospheric & electro-organic live of the psyche trio Temps Calme, the powerful set of Thérèse, and the closing was assured by the singular yet captivating band that is Gargäntua.

As you may have understood, the Crossroads Festival was certainly the best way to start the month of September : from enriching meetings to attending concerts again, what more could you ask for !

Thank you very much to the entire organizing team and to Daydream Music allowing us to cover the festival, see you next year !