Ambient and neoclassical music : two music genres that have seen their stream rates skyrocket in the past few months, and for good reasons. They both have beneficial properties, especially when it comes to helping with relaxation, increasing your abilities to focus, but also to escape, these music genres being known to be very cinematic and atmospheric. Among all the latest ambient releases of the last few weeks, it is the EP “Power Dynamic” by the English composer Jessica Roch that we write about today ; composed in rather unusual conditions, “Power Dynamic” is the result of an isolation process, a drastic adaptation procedure, but also a voluntary process of introspection. All of it is told through piano & violin chord progressions, and sometimes a few improvised vocal bits. Let’s listen to Jessica Roch’s debut EP below, before learning more about her songwriting process.

Four tracks, 14 minutes : that’s all it needs to sum up a rollercoaster of a writing process and to synthesize an artistic adventure that has pushed Jessica Roch to her limits. The EP is called “Power Dynamic” for very specific reasons – Jessica Roch indeed mentions that the lack of female representation in classical music has had a strong effect on her. However, even though the name of the EP subtly mentions the masculine overrepresentation in the music field she works in, “Power Dynamic” above all translates a complex composition process, which notably led her to compose on a piano that was not hers, in an apartment where the natural reverb of the rooms was a massive issue – these constraints are however barely felt as the listeners enjoy the EP.

The EP starts off with organic notes overlapping to form endlessly calming layers, and those newly formed layers set the stage for raw piano chords first, then violin chords, before they finally intertwine in a repetitive but oh so calming way. Then, after the relaxing five minutes of “Power Dynamic”, we listen to “Nerve Wave”, a stronger, more tormented track that is defined by the rubbed and plucked strings that we get to hear throughout the track.

Similar to Jessica Roch : Variéras is back with “Variables”, an EP that elevates neoclassical music to new electronic heights.

Following “Nerve Wave” we have “Dictate/Meditate”, which happens to be the only track that features vocals in the whole EP – Jessica Roch’s voice ; the track is a play on words and focuses on the ambivalence of the two terms “dictate” and “meditate”, one being the restrictiveness of classical music mixed with the sense of freedom that comes from using abstract vocals to describe a feeling. Finally, it is “Twelve Oh Two” that closes the EP, a seemingly two-part track composed mainly on the piano and which little by little lets the violin take its place.

You might have understood it by now, “Power Dynamic” is an EP with soft and simplistic appearances, but it is in reality dark and complex, full of classical references as well as less rigorous experiments. To learn more about the story and the artist behind this EP, we asked Jessica Roch a few questions. 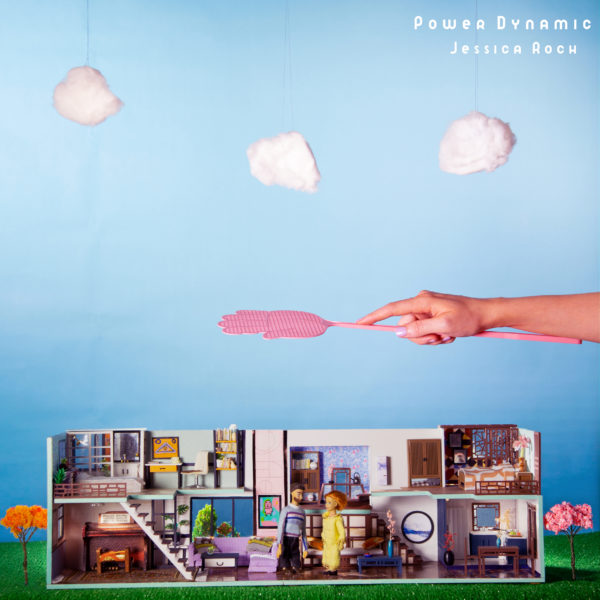 1. Hi Jessica ! Thanks for accepting to answer our questions today. I want to start by asking if you can tell us more about your music upbringing and what brought you to learning the violin and the piano ?

I was inspired to start playing violin when I went to see a family friend’s seven year old daughter play in a concert and I thought she was great. I was only three years old ! But older kids always tend to have that effect on younger kids. Apparently I pestered my parents to pay for lessons until they eventually gave in and shortly after my fourth birthday I started violin lessons. Luckily, my violin teacher was married to a piano teacher, so a year after learning violin I started taking piano lessons too.

2. What was the story behind this EP ?

Well this is my first EP despite having been a composer and musician for a while now. For years, I was a session musician working with a variety of artists and bands and wrote music for mostly short films and the occasional ad. I always wanted to put my own music out there but various anxieties stopped me from doing so, including a lack of female composer representation which had a big effect. Growing up, I didn’t realise female composers existed so I felt like my only option was to be “better than all the boys” which was obviously an impossible task. (The numbers are increasing a tiny bit but we’re still massively underrepresented in both the classical and film world!). So a couple of years ago, I bit the bullet and started putting my own music online (before releasing “Power Dynamic” she released a double single called “Expanse/Resil” earlier this year – editor’s word) and then started writing the EP last year.

I chose the title ‘Power Dynamic’ because, as a woman in the music/film world and as a woman in general, I’ve had a lot of interesting experiences with power dynamics – not all entirely pleasant. The word “dynamic” also has a different meaning for musicians, especially those with a classical upbringing, so the play on the words “Power Dynamic” seemed like the perfect title to express the ethos of the music.

3. I’ve heard that the writing process of this EP was quite an adventure, can you tell us more about it ?

I recorded EP in the depths of the English countryside, mid-pandemic. What with the global apocalypse and everything, I couldn’t hire a studio so found a little Airbnb with a lovely piano and recorded everything myself which was a fairly brutal learning experience. I knew I wanted to use a lot of delay, so the piano sound couldn’t be too resonant. Unfortunately the Airbnb’s combo of wooden floor boards and grand piano made the recording sound like I was playing in a cathedral in a cave so I scooped up every pillow, cushion and duvet in the house to dampen the sound. After a few days of recording alone, I was close to losing my mind and was probably one afternoon of microphone issues away from going full Jack Nicholson in The Shining. Luckily my hosts took pity on me and left some home made flapjacks and raspberry jam which took the edge off. I then took the tracks home to London where I spent months editing and mixing. My friend (and brilliant filmmaker) Mike Day helped me master the EP at his studio. And yes, the Airbnb hosts gave me a five star review. “We’d be delighted to have Jessica back, although she did do some weird things with our pillows.”

4. Even if the piano is the centerpiece of this EP, you’ve used other instruments as well. Can you tell us more about them ?

There are only four instruments used on the EP – piano, violin, organ and voice (oh and a bit of English countryside wind !). I wanted to find new ways to treat and approach them all, whilst honouring the authenticity of the instruments. So all the instruments are fairly traditionally classical, including the lyricless or “vocalise” style of singing but I wanted to really warp them and explore them to create an untraditional sound. On the second track, ‘Nerve Wave’, I also used the piano as a percussion instrument by using a mixture of homemade mallets, plucking, hitting and other techniques to see what kinds of noises I could get from the inside of the piano/strings.

5. Finally, quick question on “Dictate / Meditate”, as this track particularly stands out. Is it your voice that you recorded for this track ? Would love to know more about the message behind it, as its title is pretty intriguing to begin with !

Yes – it is my voice! Actually this is where the title comes from in a way. The way I compose is usually a mixture of writing musical notation (dictating) and improvisation (meditation.)
I’ve used my own voice as an instrument in my music before but not as a dominant feature, so really experimenting with my voice brought up all kinds of questions about how I make music – the methodology and the style, hence the name and the ‘/’ between these diferent concepts that I’m still working with. I should point out that I don’t actually practice meditation myself – and neither am I a dictator. Improvisation is actually my form of meditation and I find that it has the same effect for me.

Jessica Roch is to be found on all streaming platforms. You can also follow her on Instagram !