Jacques is back with a dissected track sold as an NFT !

You might know Jacques for his ability to innovate and surprise anyone that stumbles upon his music. Do you remember his 10-hour livestream during which he composed his album “A Lot of Jacques” in front of his audience, using everyday objects ? Whether it is through his person or his music, Jacques brings crowds to life, and yesterday, he announced his comeback by organizing an NFT sales operation, and it is not a small one : his upcoming single releasing on June 3rd, cleverly titled “Vous” which means “You” in French, has been dissected second by second, and every second is sold for the minimum price of 145 €, or 0.065 ETH ; indeed, by purchasing a second of his track, you become the owner, among other things, of the publishing rights of said second… forever. And some artists like Agoria immediately rose to the occasion. Let’s analyze this sales operation directed by the record label Recherche & Développement – and by the way, it is a first in France ! 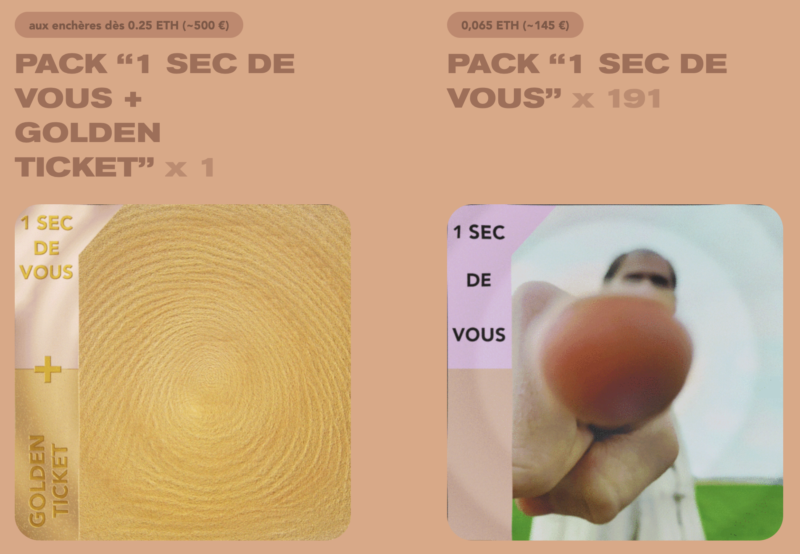 Although it is the first NFT operation of its kind in France, it is the third in the world to take place ; if this NFT sale allows you to become the sole owner of a second of the track (and thus to listen to a second of it before everyone else), like many other NFT sales, it also allows you to get access to various digital and physical items. While the first pack (sold for around 145 €, the value of Ethereum – ETH – being in constant fluctuation) allows you to obtain the publishing & master rights of a second from “Vous”, it also allows you to get, for example, a vinyl signed by Jacques himself, an exclusive NFT video, or even an access to a secure player to listen to all the seconds that have been unlocked through the sales operation. The “golden ticket”, however, gives you access to all the contents of the initial pack plus two tickets for Jacques’ concerts that will not expire. This NFT sales makes for a complete operation that undeniably brings Jacques closer to his fans !

While the operation may seem a bit odd to anyone who’s not familiar with the artist or with NFTs at all, in reality, NFTs tend to get more and more popular within the music industry, worldwide. NFTs are seen by many as a way to earn money from their art and music while having full control over the sales and their creation – unless a record label or other stakeholders are involved of course – the sales of NFTs are considered by many, and by Jacques himself, as the crowdfunding of the future or as a much safer way to live off your music than being streamed. And for Jacques, this operation is like a love letter to his fans that says that without them – without “Vous” – his music and his art would cease to exist.

In any case, while we wonder how many pages will the contract contain when publishers will have to make nearly 200 people sign if a company wants to use the track for an ad, Jacques wants “Vous” to be part of his work !

“On June 3rd, I will release a new song that I named “𝙑𝙤𝙪𝙨” because I sing about my relationship with others, therefore my relationship to 𝙫𝙤𝙪𝙨 🙂 Sometimes 𝙫𝙤𝙪𝙨 make me lazy but deep down I love you and I keep thinking that by increasing our wisdom we could internationally be friends, colleagues, comrades, fellow citizens, human brothers and sisters ; and yeah, I do think like that.

So that the release of “Vous” is a communion between 𝙫𝙤𝙪𝙨 and me, I have a crazy deal for 𝙫𝙤𝙪𝙨 : you can become a co-owner of the track the same way I am. So that 𝙫𝙤𝙪𝙨 own “𝙑𝙤𝙪𝙨” with me. From now until June 10th, I am selling contracts in the form of NFTs which stipulate that 𝙫𝙤𝙪𝙨 are entitled to this song and that therefore, we share the money we earned through the record’s sales, the streams and all kinds of uses of the song like for example in movies, ads, video games, but for example not in books because there is no music in books.

I divided the track into seconds, I kept 2 seconds for me and my team, and I am therefore selling 192 seconds at a price of 0.065 Ethereum each, which amounts to around 145 euros. I will tell you about it in detail on the site coded for this purpose jacques.live, and I will answer any questions you may have about it on Instagram this afternoon and tomorrow.

I’m on a roll, I hope this operation will keep making sense over time, but beyond the obvious marketing that it does for my (our?) song, I think the times are calling for experimentation and new ideas. In a future where crypto currencies would be stable, and where blockchains would pollute less, artists like me could consider being produced directly by their audience in a crowdfunding++ mode rather than being matrixed by record companies.”

The NFT operation will last till June 10th and is taking place on Rarible. More info on Jacques’s website jacques.live !