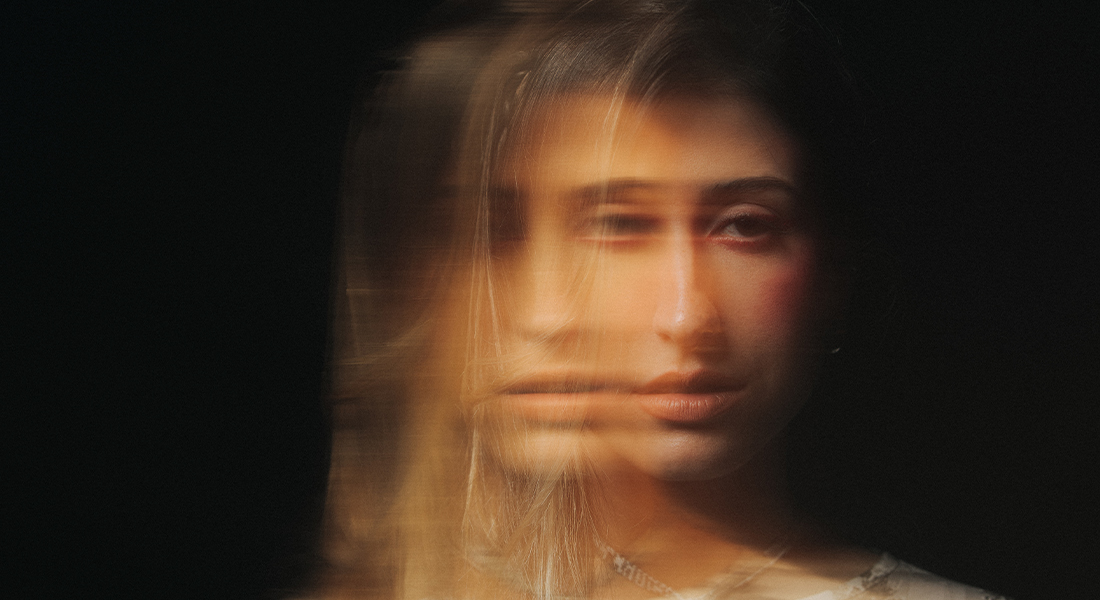 Among the artists who know how to go straight to the point and move our hearts from the get go, there is Sauvane. We’ve talking about her on the magazine a few weeks ago in order to celebrate the release of her first French track called “Qu’est-ce que tu veux ?” (in English : “What do you want ?”) ; today, it is with a healthy dose of emotion, introspection and a call to an inner journey that we dive into her latest EP, named “Hurricane”. Her EP will certainly remind you of artists like Björk or  FKA Twigs, and for good reason ; we spoke with Sauvane in order to get to know her a little more and to understand what goes on in the sensitive soul behind this new collection of songs.

1. Hi Sauvane, and thank you very much for answering our questions today ! To start this off, can you introduce yourself in a few words for those who don’t know you yet ?

Hello ! I am a singer, author, composer and also a video director. I am therefore involved in all aspects of my musical project ! As for the music and the music videos, I am inspired by melancholy mixed with poetry. I’ve released a very eerie first EP called “Night Thinker” a while ago, and I am happy to finally be able to share my second EP “Hurricane” which, in the form of an emotional cycle, goes from darkness to light.

2. Before getting into the most important subject which is your EP “Hurricane”, I wanted to go back to your early beginnings, which happen to have started both in advertising and in recorded music. You have started with the release of a few singles, starting with your first one called “Addicted”, in which you sing in English on an ethereal melody that feels very electronic and alternative pop at the same time. Where does this musical universe come from – especially since I feel like we can still hear bits of it in your latest EP ?

It comes mostly from my childhood, I used to listen to CDs while playing, I was inventing stories and my parents had Dido, Radiohead, Björk, The Cranberries on repeat… There were a few albums like that that I listened to on repeat as well. It must have influenced me afterwards, because I was always attracted by alternative electro sounds like Boards of Canada which I then mixed with pop sounds that stemmed from Uffie, Crystal Castles, Cocorosie…

3. After that, what kickstarted your music career was actually a featuring you did on a track by the French electronic music artist called CloZee, on a track called “Air”. How did this opportunity come about and how did it impact your early artistic career ?

We both come from Toulouse in the South of France ! We were put in touch and I loved the beat she sent me. I was immediately inspired, I composed a melody, lyrics and recorded from my apartment in Paris at the time (I like to remember where I wrote and recorded my songs). Then I went down to Toulouse shortly after and we fine-tuned it all together.

This track really allowed my music to travel, especially in the United States because CloZee now lives there. And I’m happy because I think CloZee’s listeners can be very sensitive to my music and my lyrics. It apparently touched them that I wrote as if I was the Earth myself, when I wrote “That’s what the moon told me”.

5. And since I mentioned earlier your other job in the music industry which is to record for advertising music, I would like to briefly go over this subject because many artists who are electronic and instrumental music composers share a particular interest in this music field : how did you get into the world of music for ads ?

Well, I wanted to take guitar lessons in college to be able to compose my own songs and potentially be able to please Bill Kaulitz, the singer of Tokio Hotel… And that’s where I met Nico Raynier, who was my teacher for 2 or 3 years and who was also a composer of music for ads & films. And one day he found out that I was also a singer and that I was posting guitar covers on the internet. He directly offered me to work together and we participated in advertising competitions and it started with a Decathlon ad. Then I met Pierre Sendrané who offered me to sing for Redbull, Chopard, Audi ads and more.

5. And what are the projects that you’ve worked on recently ?

Sync-wise, recently, I worked on an electronic music cover of LOVE by Franck Sinatra for a Pepsi ad, with ASH who is a very talented artist, and who impresses lots of people with his ability to master many instruments, and with whom we did a featuring on “Forgive me”. And speaking of music lovers, we co-composed with an artist called Mimesis the song “Tomorrow” in a softer, more folk-ish register, for the new Air France film and its new A220 plane.

Similar to Sauvane : We’ve talked about friendship, life changes and side projects with Almeeva who just released his latest EP “To All My Friends”

6. Now let’s get to the main subject of this interview, which is your latest EP, entitled “Hurricane”. It starts with a magnificent introduction named “Play” – which sways between atmospheric music at the beginning of the track and an omnipresent voice its second part ; the tone of the EP is set ! How did you compose this track ? What was the inspiration behind it ?

Thank you very much !! Even though it is the intro, I think it’s the song I last worked on for the EP. I think it sums it up well because it has a lot of contrasts. It lets us slip into a very dark state of mind with these slightly distorted instruments and a rumbling bass… while the voices are quite soft, almost breathless. But it is hard to tell yet if these voices are there to reassure us or rather to bewitch us and take us down with them.

It’s a bit like a song that could be in a movie where the person can feel that a certain situation is going to turn out badly for them. They’re still hopeful, but it’s already too late to back down.

7. After “Play” we get to hear a track called “Ocean”, which for me is the clear centerpiece of the EP : skillfully composed, it bears both silence and reverberations, which both leave a lot of room for your voice ; your voice fills the whole space – vocalizations which are, to us, reminiscent of the early works of FKA Twigs. Can you tell us more about the message you’re trying to spread with this track ?

I wanted to start by thanking your for your feedback on “Ocean”, I like to find out what each person’s favorite song is, since it’s often very different from one another !

I didn’t necessarily have a message in mind for this song, I wanted to dedicate a song to all the people who have lost a loved one. This track is like a deep dive into the abyss of our thoughts where pure sadness can echo around us. If it were a fantasy world, we would end up drowning in our tears. But looking back now, perhaps the message in this track is not to neglect our relationships and to tell our loved ones how we feel while there is still time to do so.

8. The following song is called “Qu’est-ce que tu veux?”, which as I said previously on the magazine that is stands for “What do you want?” in French, and it deals with a rather difficult subject : that of self-perception. It’s the first song you’ve released in French : was it an easy decision to make ? Have you been inspired by anything in particular when writing this song ?

I didn’t make a decision really, I just started to write these lyrics in French, I hummed what I was thinking of at the time and I left it like that when I recorded. I wouldn’t necessarily say that I was “inspired”, it was just a day where I felt abandoned, even by myself, and I needed to externalize these thoughts to understand what was going on in my head and what I had to do to get better.

9. And should we see the question “What do you want?” as a question that you address to yourself ?

Almost but not quite ! Sometimes we are very angry at ourselves, in a sense that we have trouble understanding and controlling our actions. This question, I rather asked to this side of my personality which is always very negative and very harmful for my mental health.

10. I also know that you also are a film director : does knowing how to direct videos & film shoots helped you achieve your artistic vision for this song’s music video ?

Yes, of course, as soon as I write a song, I very quickly had images in my head, I had the desire to dance, in slow motion… To me sound & images go hand in hand, always.

For this new EP, I wanted to picture “Qu’est-ce que tu veux?”, which is a very important song in the EP, and “Mountain” as well, because I wanted to film a music video that summed up the story of this EP. For “Mountain”, I wanted to embody each emotion I talked about in the song through a character. This is why there are 5 different people in the video, each symbolizing joy, sadness, courage, passion and hatred. That way, at the very end of the video, after an inner battle, they restore balance within the being who got caught up in an emotional storm.

11. I know you’ve just released your EP, but what can we expect from you in the next few weeks ? A new music video ? Live performances maybe, now that Covid restrictions are loosening ?

Ideas flow very quickly in my head so you will surely be able to watch a live video for “Ocean”. However, I still have to choreograph it, to find a place to film it… so it’s not done yet ! But what’s for sure is that you’ll be able to find me at the Métronum on April 21st in Toulouse, with the band Magenta.

12. Finally, here’s a question I like to end my interviews with because it allows me not only to learn more about the artists I interview but also to make the readers discover new artists : are there has an artist that you’re keeping an eye on lately, and why ?

Very closely indeed, because I even went to meet them in Ukraine; it’s the Wavewalkrs duo, two incredible musicians. I recommend you to listen to their latest album “Rebirth” and especially watch their live performances. It’s a very good example for me of what human connection is: as soon as they play something I want to sing along, as if the notes and sounds they chose triggered emotions and animated pictures inside my head. We did several collabs together – these are songs that I hold really close to my heart – like “Joy”, and today the lyrics of “Born” make even more sense: “We were born not for wars, we belong to the stars”…