Premiere : “BURN”, TETHA’s enigmatic first single, casts a light on the self-destructive part that we all have in us

Falling in love with new music happens to all of us. You’ll stumble upon melodies that move you from the very first seconds ; all it takes are a few emotional, savvily chosen chords, powerful lyrics sung perfectly… and these elements will still have you hooked after a dozen, even a hundred plays, and, well, what we’ve just described is exactly what happened to us when we first listened to TETHA. The artist, who evolves in an alternative, dark pop realm – and who, as you will see in a few lines, has gathered renowned producers around her first single & first EP – is about to unveil the first single of her new solo project. The song is called “BURN”, and TETHA has agreed to premiere it with us. Get ready to dive deep into the dark side of your own emotions!

“The event horizon has no return
But I’m the one who set the flame,
When all the garden was asleep”
– “BURN” – TETHA

From the very beginning of the song, the atmosphere is set. All it takes is a few vocalizations & a few harmonies for TETHA to take her audience with her in her musical universe. And it won’t take more than the first few words of her lyrics to make us understand that the artist, in the music video – which has been directed as a sequence-shot – talks about her, and is about to let a part of herself die in plain sight. Her voice bewitches us ; all of her vocals overlap and interact subtly with the soundscape that takes place around it – if it doesn’t give you the chills, we don’t know what will. The melody, on its side, is sometimes minimalistic & crystal clear, and sometimes heavier & saturated, and it echoes perfectly all of the torments that are playing in TETHA’s mind as she sings what her heart feels. You’ve probably guessed it : we cannot wait to listen to the rest of the EP as this first song sets the bar quite high artistically and emotionally speaking !

And, in order to learn more about her creative process in a global way, we’ve asked her a few questions. 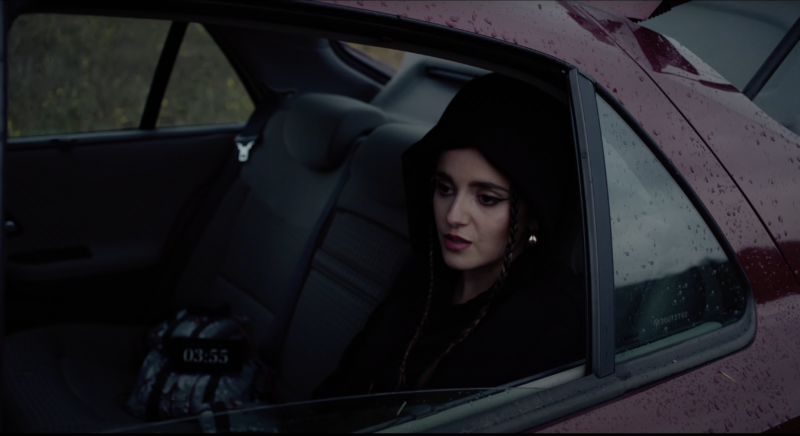 1. Hello TETHA and thank you so much for premiering your first single with us ! Before we take a look at the song and the music video that comes with it, can you introduce yourself in a few words for those who don’t know you yet ?

Hello Cloé ! I’m TETHA, I’m an electro dark-pop singer and songwriter and I live in the parisian suburbs. I’m releasing my first single and music video “BURN” this Tuesday, and my first EP “Bound To Lose” will be out on November 18th. TETHA is all about pop vocal lines that find their place on unstructured, experimental productions, which are influenced by both the 80s electronic music scene as well as the techno one. The lyrics are introspective and speak of deep and sometimes trashy feelings, and I always try to be as honest as possible. I write about periods of my life that have left their mark on me and I have a therapeutic urge to set them free. Once the lyrics are written and they land on the melody, I’m relieved, and the things I’m talking about suddenly feel lighter to bear. The lyrics and general atmosphere of the songs are always very dark, however.

2. “BURN” is your first solo track – and it supports an upcoming EP on November 18th – but have you played in bands before ?

Absolutely, I played and carried an alternative rock band for 4 years before going solo. The project came to an abrupt end in April 2020 and I found myself alone, which allowed TETHA to be born a year and a half later. In the end, what I experienced as a failure turned out to be a huge life lesson. For me, going solo was a huge challenge and I didn’t think I could do it, yet that’s how I envisioned it when I started singing and composing at a very young age. I had to deal with a lot of parts of me that were telling me I didn’t have what it takes to be an artist, or that I was too shy of a person to be one. Lots of impostor syndrome here. I understood that I was going to have to be patient and tolerant towards myself, and when I started to realize that each step would bring me towards my goal, I could believe more and more in the process and things became real. And in the end, this new project is a 1000 times truer to me than anything else.

3. I know that you surrounded yourself with some very talented music producers for this track and for your EP : can you tell us more about the people who helped you bring this music release to life ?

Yes, I tried surrounding myself with artistic people as much as possible before the project even existed. I wrote the EP between September 2020 and June 2021, without even thinking that these tracks would ever be released as a solo project. It was written during lockdown, then the curfew happened, and I needed to write and it was also the period when I started producing my music. In August 2021, I was working in a bar close to the sea, and since it was not always full I had time to brainstorm with myself staring at the horizon. This is when something sparked in me and allowed me to realize that I had more than enough songs for a first EP, and that I had no more excuses not to get started.

I immediately contacted an artistic director called Tom Josso. I wanted to develop both a strong visual and a cinematographic universe. So this is the first move I made to bring my solo project to life. Then, I contacted a producer and musician called Fhin. I was literally in love with his album “TRAUMA” and I wanted to work with him on my tracks. I just sent him a DM on Insta with my demos and that was it. Then, a second producer entered the project called BAUMA, who brought his unstructured and experimental sound to the EP. He is the one who produced “BURN”, and I am very grateful to be able to work with these 3 extremely talented people.

Similar to TETHA : Gilone bewitches her audience with “Run”, a track that fuses both lyrical and alternative music together

“BURN” is the first song I wrote during this empty period of my life which was very difficult for me because it was also the time when many old wounds reopened. It was chaos. At first I couldn’t even write, and then this track finally saw the light of day and it did me a world of good. It was not planned like that initially but I am very happy that this song comes out first, and symbolically it is very strong for me.

There will be a 2nd music video that will be released in 2023, and this time it will be for the main track of the EP.

5. The lyrics of “BURN” are very raw : we can hear you say “don’t worry I am gone” more than once ; if the question is not too personal : what are you talking about exactly when you say that ?

The lyrics are about self-destruction, about the end of a cycle and of a chapter. There is also a lot of regret, guilt and questioning. It is the end of a relationship that becomes toxic overtime and ends up hurting the other person, and where leaving and letting go is the only option that remains. But it is also about this feeling of vertigo, when it comes to the death of a part of yourself, when you consciously put an end to something you care about.

6. As for the music video that comes with “BURN” and which will be available everywhere starting from tomorrow : the video is sequence-shot where we see you in a car about to explode… and the police who arrive on the scene seem almost desperate, close to even just letting the car explode, without intervening. How did this scenario come about, for the music video ?

In the end, you realize that it’s just me vs. me, where I’m about to blow up an earlier version of myself in this car. It symbolizes the end of an era and the beginning of a new one, a rebirth, really. But I think the story is rich and enigmatic, the story still remains open to other interpretations and that’s what I like most about cinema.

7. You’re about to perform on October 26th in Paris at the Disquaires : it’s your first live performance as TETHA ! How do you feel about going on stage ? Is it a big part of your musical project ?

Totally! I come from the rock scene where everything comes alive on stage. I no longer make the same style of music today but I want my live performances to have this organic energy. I am surrounded by an electronic harpist who will also be using the synths, and a drummer. There are also a lot of electronic elements, but having musicians on stage with me was important. I’m very happy with the live show we created with Camille and Baptiste, and so excited to play it on Wednesday.

It’s crazy but I haven’t played live since my previous project stopped, and, fun fact, the last time I played with this band was just before the first lockdown, at Les Disquaires. I’ve closed the loop !

8. And since I like to end my interviews with a question that allows readers to discover artists through the artists that I feature on the magazine : is there an artist you’ve been keeping an eye on lately, and why ?

I heavily recommend you to listen to Malvina Meinier, she is an artist that BAUMA also works with. All of her work and the music she has released is extremely rich, ranging from classical music to highly produced, detailed and cutting-edge electronic productions. And then she just wrote the orchestral arrangements for Pomme and was her guest a few days ago on Radio France. She is a very inspiring woman and artist!

TETHA will be available on all music streaming platforms starting from October 25th. You can also follow her on Instagram !