Oklou and Krampf have made one a few years ago, other artists have made one for themselves over time… we are talking about games, and more specifically about bands making video games. A large number of artists, whether they are famous or not, have created visual content to push their releases to their audiences. Some even going so far as to create an interactive video game from scratch to highlight an upcoming single, EP, or an exclusive track… and today, we focus on the work of the French psychedelic pop rock band Thé Vanille who, in order to promote the release of their indie pop rock track “The Flower Fix”, have created a first-person exploration web game which they’ve named “The Slower Fix”. Let’s analyze what lies behind the wacky colors of this open map – and something tells us to look for something exclusive that they’ve hid behind the hills ! 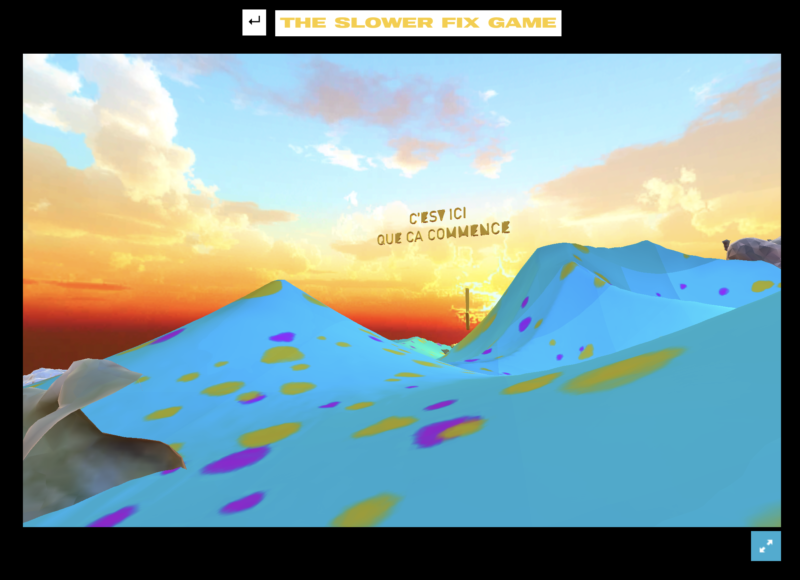 – screenshot from the game “The Slower Fix” by Thé Vanille. The sentence says “this is where it starts”.

Showcasing the true colors of the band – which are made of bright, psychedelic, hallucinated tones, textures and sounds – the game “The Slower Fix” is a game that can be found on their website. Inspired by first-person exploration games, “The Slower Fix” is made of wastelands painted with surreal colors, making you feel like you landed on a planet lodged far away on the other side of our galaxy ; our first steps in this artificial world are accompanied by a slow, distended song.

Similar to Thé Vanille : Jacques is back with a dissected track sold as an NFT !

Thus, the more we get to discover the map and get to the heart of it, the more we see ourselves immersed in the universe of the band ; they are known for wanting to offer more than music to their audience and followers. They reiterate this by pushing even further the need to show that their universe extends well beyond their pop rock hallucinated songs. “The Slower Fix” is to be found where artistic performances and marketing ideas meet, and proves once again that an artist or a band are not limited to their music but on the contrary to the extent of their creativity.

And, if you hadn’t already noticed, the music of “The Slower Fix” is actually an alternate and slowed-down version of their song “The Flower Fix”, whose music video already showed what was about to happen in the video game. To be listened to & watched below !

Thé Vanille is to be found on all streaming platforms. You can also follow them on Instagram !