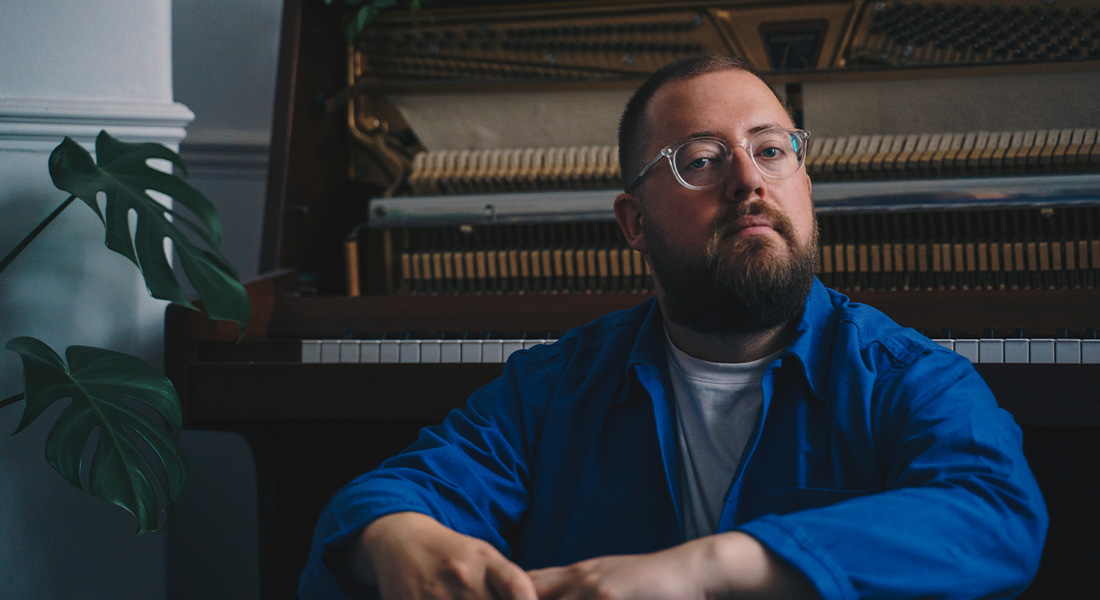 We have talked with Simeon Walker to celebrate the release of “Bewild”, an intimate and emotional ballad taken from his upcoming EP “Imprints”

Sometimes, it doesn’t take much for emotions to abound. Sometimes, all it takes is a few skillfully played piano chords, a minimalist atmosphere and muffled sounds to make you fall in love with a track, and that’s exactly what may happen to you when you listen to “Bewild”, by Simeon Walker. He is both a pianist and composer of neoclassical and ambient music ; known for his electro-organic ballads, he started off by offering his audience to listen to minimalist tracks ; as time went by, his music became more and more complex… until a complete change happened. After taking the decision to go back to his minimalistic musical roots, Simeon Walker has been distilling the various pieces of his future EP “Imprints” for a few weeks ; in order to celebrate the release of his single “Bewild”, we have asked him a few questions !

1. Hi Simeon ! Thanks for accepting to answer our questions today ! Before we start, can you introduce yourself in a few words to those who don’t know you yet ?

Hi, thanks for having me, it’s great to speak with you! I’m a pianist & composer from Leeds in the UK. I make music that most people tend to describe as modern-classical – if you enjoy listening to artists like Olafur Arnalds, Nils Frahm and Hania Rani, I hope you’d enjoy listening to mine.

2. This series of single releases as well as your upcoming “Imprints” EP release clearly shows that you are going back to a previous era of yours, that of more minimalistic, intimate piano pieces. Can you tell us more about this artistic choice ? Did it come naturally or did something trigger it ?

Yes, I think for a number of reasons. Firstly, perhaps more as a matter of circumstance, in that all of us had to become used to making music wherever we were during the lockdowns of the pandemic. These pieces were born in January and February 2021, during a period which was very dark, cold and pretty miserable for everyone, and I suppose this did have some impact on the music I was creating at the time. I didn’t consciously set out to make a “lockdown project” as such – as our creative endeavours often are, it was more a product of the environment that I was living in at the time, and as you’ll see, the nature of place in relation where and how I create is of huge importance to me.

My previous album Winnow was much bigger in scope, both in terms of the size of the project and sonically too, with it featuring six other musicians on the record. Whilst I love playing, exploring and collaborating with other people, I definitely felt a desire to return to the simplicity and minimalist style of my earlier work. I hope that listeners can imagine sitting in my living room, listening to me play. This is where I work: where I play, write and record, and I have always tried to incorporate this sense of intimacy through my music and recordings. It’s not just simply music to be heard in the background; it’s something real, genuine and from the heart.

3. You’ve just released your track “Bewild”, an intimist, calming yet emotional neoclassical ballad that will be featured on your EP “Imprints” in a few days to come. Before digging into “Bewild”, what are the events that inspired this upcoming EP, if there were any ?

I think this short collection of four pieces can best be described as snapshots into a certain moment in my life, as I described earlier – fleeting moments in time. The first track ‘Gleam’ is more of a lighter, bouncy, jaunty piece which draws reference to the  way that light often illuminates my piano room; whilst ‘Ache’ is a more sombre, melancholy piece which unfolds itself gradually, an ode to the feelings of longing we’ve all encountered in this very strange time. The remaining tracks ‘Bewild’ and ‘Whist’ have other further connotations, and so whilst I wouldn’t say that there was an overwhelmingly specific unifying theme working its way out through the EP as such, I did feel that the pieces held together as a musical documentation of a specific period of time in my creative life, and that in that, this was actually enough.

4. The track itself is a short, calming & emotional piano piece that sways between different emotions, going from a few scattered piano notes to a slightly faster-paced series of chords, creating variations while staying under the 2-minute mark. I personally interpret this composition as the way our thoughts come and go inside our minds, but what does this instrumental piece mean to you ?

I really like your interpretation, and thank you for sharing that! I think you have definitely hit on what I was trying to convey in this piece. Compositionally, the main section uses a consistent descending interval of a major 6th in the left-hand accompaniment, cascading downwards chromatically throughout. It isn’t “weird” or particularly experimental, but it does create a sense of ambiguity, giving space for a right hand melody that dances and flows a little more than I would often play, using repeated rhythms and phrases to, I hope, create a slight sense of uncertainty about where it’s going and where it will end up – a jumble of thoughts.

I called the piece ‘Bewild’ after the word bewildered – that feeling at the beginning of this year when everything was just so uncertain and we still didn’t really know what was happening, when it would end, and indeed, what the world would look like when we had got through this. For me, it’s a bit like walking around blindfolded, not knowing where things are going, or even how they will be resolved.

Similar to Simeon Walker : Track premiere : Tim Linghaus collabs with piano and coffee records and unveils for us the second single of the upcoming compilation “Realismo Magico”

5. And I love the way it’s been recorded, it allows us to even feel the piano keys being pressed ! Was this intentional ? How did you record the track ?

Thank you for this, I’m so pleased you feel this. I’m aware that hearing, experiencing and being aware of the mechanics of the piano is not for everyone, and some people have said they even find it distracting. I’m sad about that, as personally, I feel that it isn’t as simple to separate the process and the way that the instrument creates sound from the actual sound itself. It’s such an incredible and versatile instrument – every piano is different, and I love the variety of tones, textures and timbres that it can create, and I am not convinced it’s as fun, or indeed genuine, to only listen to a broadly similar, often sanitised piano sound on every recording. That doesn’t feel real.

I used quite a specific microphone setup to enable both the piano to be captured in this way, but also to capture the sound of the piano in the room. As I mentioned earlier, the intimacy of the recording and the place in which it happened is very important for me, and making sure that this is conveyed through the overall sound of the recording is vital. I’m indebted to Andrew Glassford and Martyn Heyne for their respective mixing and mastering skills in helping this be possible.

I understand why people might find the mechanical noises distracting. But then, the music isn’t primarily designed for people to have it on in the background (although I know it will be, and that’s ok!) – it’s meant for listening, experiencing and encountering for what it is, as it is, and that is fundamentally a part of it.

6. Does “Bewild” hold a special place in the EP’s tracklist ?

‘Bewild’ is the piece that has the most rhythmical movement on the EP. A great deal of my music to date has featured less movement and more spaciousness than this piece, and I felt it was important to place it as the third track to enable this flurry of notes to be experienced as something different, perhaps even surprising, amongst a set of other spacious, meandering pieces.

If I was to give a one-word explanation for each track on the EP – beyond the one-word titles I like to give my pieces – I’d say that ‘Gleam’ is light, ‘Ache’ is dark, ‘Bewild’ is puzzled, and ‘Whist’, the final track, is silence.

7. I know the EP isn’t released yet, but do you plan on playing it live ?

Very much so, and I have played some of the pieces in a few of the live shows I have been able to do so far. I’m looking forward to a year ahead in which many more live shows and concerts can happen again, and I’m hoping to return to Europe in the Spring in 2022 as well as playing across the UK.

8. And here’s a question I like to ask by the end of an interview : is there an artist you’re keeping an eye on lately, and why ?

I might have to give you a few answers for this question! There is a lot of exciting music being created in the UK in this extremely broad area of the musical landscape.

A regular collaborator of mine is called Josh Semans. He’s a producer but also plays an instrument called the ondes Martenot, which has such an interesting sound. I’m excited for people to hear his upcoming solo material, and we’re also working on something new together.

I’d also highly recommend following another UK-based artist called Alexandra Hamilton-Ayres. She creates such wonderful sounds and textures in her music, and I’m pretty sure you’ll be hearing a lot more about her in the coming years.

Look out, too, for Ell Kendall and Benjamin Fitzgerald – two artists making interesting and captivating music for larger ensembles.

Simeon Walker is to be found on all streaming platforms. You can also follow him on Instagram !