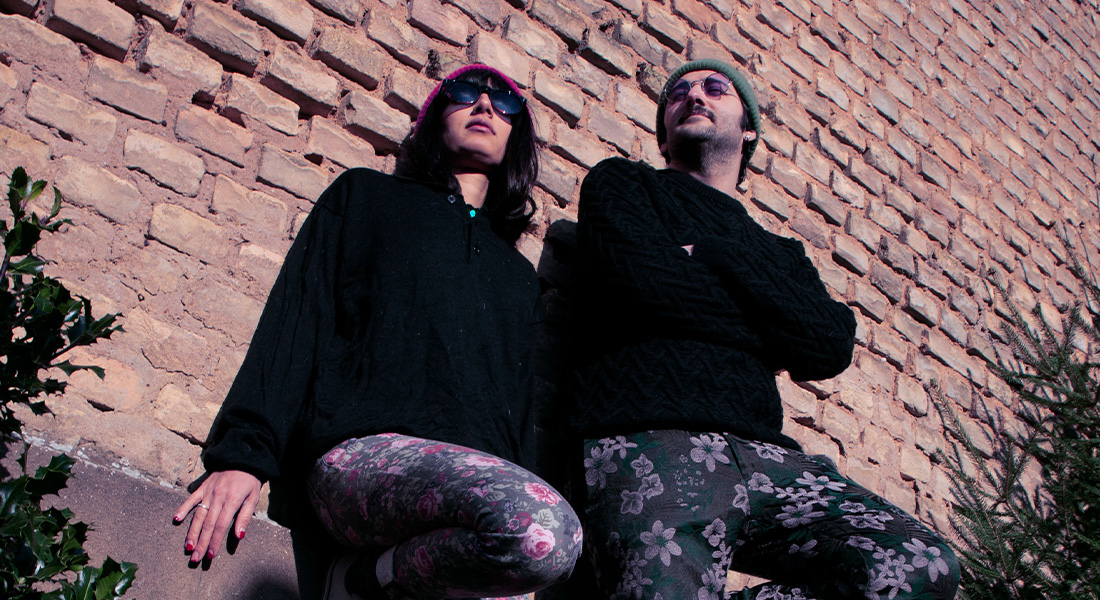 We have talked with Makichi, an Iranian duo that has experienced the cultural and musical restrictions of Iran

Many of us French, English, European, or American people have a hard time imagining and understanding the restrictions and prohibitions that may exist in the world regarding music and cultural expression. So when we crossed the path of Makichi – three Persian words that mean “we / who / what” – we were left dumbfounded, both amazed by the fate of two artists but also terrified of the various prohibitions that were preventing them from being the artists they wanted to be.

Makichi is a duo composed of Ash, Iranian born in Tehran, and Sonia, Iranian born in Strasbourg. They met in Iran and they decided to make music together in Iran at first, but it is in France, in the city of Strasbourg, that they managed to freely express themselves musically. After composing and releasing an album in Persian while in Iran, they released a lot more music, starting with “Error” in 2017 for which they were rewarded with the silver trophy at the Global Music Awards as well as a nomination at the Independent Music Awards. On March 5th, they came back with a second studio album called “The Rain Stopped”, an avant-garde album with Persian, Arab and Western influences.

To learn more about the duo’s early beginnings, their lives in Iran and their new life in France, we asked them a few questions.

Hi Makichi ! Thank you very much for answering our questions today. Could you introduce yourself in a few words for those who don’t know you yet ?
Sonia : I’m Sonia Kelichadi, Iranian/French singer and songwriter and a mother.
Ash : My full name is Farshad Khoshnoud but Ash is much easier for everybody. So I’m Ash, Iranian composer, producer. And a father.

If that’s okay, I would like to talk about your early beginnings as musicians first, and about both of your musical backgrounds. Ash, you were born in Teheran, and you were playing in an underground rock band, from what I know. Could you tell us a bit more about what made you fall in love with rock music ?
Ash : Yes, that’s actually interesting. I think, some of it is due to my father’s music background who is a well-known Iranian composer, and his works are mostly Pop-Classic, and most of his composing was before Iran’s revolution in 1978 and pop music back then was really different. So we never had traditional Persian music playing in our home. And also, my older brother introduced me as a child to bands like Red Hot Chili Peppers, Depeche Mode, Dire Straits etc. And we were always listening to these kinds of music at home. And that’s the foundation of my music background, so I started learning Blues and Rock music and I chose the bass as my first instrument.

Sonia, on your end, you were born in France but your family is from Iran. How did your parents’ culture influence you, musically speaking ?
Sonia : For me it’s the same as Ash. There was always traditional Persian music playing in our home. My grandmother was always reading Hafez* for us. And it was like a rule in our home that everyone has to play a traditional instrument. So I started playing Tar at 16.

*Hafez is an Iranian poet from the 14th Century.

So both of you met in Iran, and you started making music together there. How was it, composing while trying to cope with Iran’s cultural and musical restrictions ? And what are the actual consequences, if you get “caught” singing as a woman, or making rock music ?
Sonia : Fortunately I never got caught so I can’t speak of my own experience. But I’ve always heard bad things.
Ash : Let me tell you a story which is a good example. Few years back, some people decided to host a small private rock music festival with live music on a closed private property. And they sold some tickets so the musicians can also get paid, but it was definitely not much. During the night of the show, the property got raid by the police and everything ! And they arrested everyone on the ground, accusing them of “Satanism Gathering” ! Fortunately I couldn’t attend the event. After the days that they were kept in custody, they all sentenced to get whipped, or got a big penalty fine, or were put for 6 months in prison ! It’s like that !

Has the situation evolved, since you left ?
Sonia : We hope so, but we never hear anything, we don’t know if it is getting better or even if they have a little bit more freedom !

Before talking about your latest release, I wanted to mention your single “Losing My Religion”, a single you released in 2020. The song is both as calmly repetitive as a lullaby and as melancholic as someone saying goodbye. Could you tell us more about this track ?
Sonia : We always wanted to make our music as minimal as it can be.
Ash : We wanted to cover the song, but we wanted it to be very different to the original, which is a great experience to do such a thing. And we thought amazing music like “Losing My Religion” is the most convenient music for us to cover. Music and words, both of those spoke to us.

Now on to your latest release, you have just released an album called “The Rain Stopped”, a 10-track album that is filled with various influences, both coming from your cultural backgrounds and from less traditional places, may I say. I was absolutely hooked and left with goosebumps from the introduction of the album. On “Story (The Beginning)”, we mostly hear you, Ash, talk about your lives, and how it weighs on you today. How did you compose the album, and what made you want to make this intro so soothing yet so raw and truthful ?
Ash : Can I just say how much it is delightful to hear a meaningful feedback on our album ? Thanks a lot. And as a composer, it’s really hard to say why you decide to do something the way you did. Because there is always many emotions, experiences and knowledge that developed inside of you which unconsciously makes you take some decisions in your process. Those things inside of you tells you how, and i think it happens unconsciously. When you let it happen. And to let the emotions inside of you speak instead of overthinking it is the best way to do it.

Overall, the album is a lot more electronic than your previous releases, especially than your first ones. Is there a reason for this sudden change ?
Sonia : Actually we’ve always thought about making Electronic music.
Ash : Exactly, maybe the path that you see since the beginning to this album was our transition to the destination we’ve always seek.

I voluntarily jump to “A Dead Memory” ; it is one of the most acoustic tracks of the album, and we hear both of your voices intertwine on it, as you both tell a story and share thoughts about memories fading, and wishes not fulfilling. When you are writing the lyrics, are you both contributing ? If so, can you tell us more about your creative process, and your will to share personal details of your own stories like in this track ?
Sonia : Yes we both contribute to the writing process. And as we move forward in the album, step by step, and we reach “A Dead Memory”, it is when we realize all of these memories are fading away and turning to some illusion.
Ash : Actually we have a video on our Youtube channel and our Instagram page, which explains the paths between the songs and how it is relevant to the 7 steps of mysticism. The 7 steps towards redemption and enlightenment and freedom. And we wanted this song to sound little more empty than the others. That’s why we aimed for this type of production for this song.

“You work, you try, you comply, you cry
You fight, you run, you lose, you learn”

After “Antrakt” and “Opposites”, two very introspective tracks, we get to hear “You”, which brings another type of energy to the album. This time, the lyrics are a lot less descriptive and a lot more simple, yet they trigger powerful emotions and vivid images to the listener’s mind. I can imagine that the lyrics are actually a depiction of how you both lived your lives, from being children to the adults you are today. How did you write and compose this track ?
Ash : First of all bravo for your perspective on this song, because I remember the basic idea of the lyrics came from our own son. Seeing a new born baby who has to start doing all of these things made us thought that everyone has to go through the same process. But in Iran, mostly, it doesn’t have a proper result for the people. Hence the Persian part taken from Hafez, he says « we did it all and nothing happened, we realized we should just leave this town ». And we thought that to convey such a message we needed a more energetic music with lots of drums sound.

As the album ends and as we listen to “My Home (Ending)”, we are left with the sensation of having lived a bit of your life with you. Have you always been at ease with sharing your stories like you did on this album ?
Sonia : Yes, because when you want to present a deep artistic work to the world, you have to honestly look inside of yourself and share your own stories in a truthful way.

I know this album has just been released, but what are your plans now that it is out ?
Ash : At the moment, we’re trying to present our album to a broader audience. And we really miss being on stage, we hope we can share our music with others on a stage soon. Because that’s the most beautiful part of being a music artist. Being in front of a live audience and share your music with them. And we definitely continue to work hard, in any way we can. As per our motto, we never stay quiet.