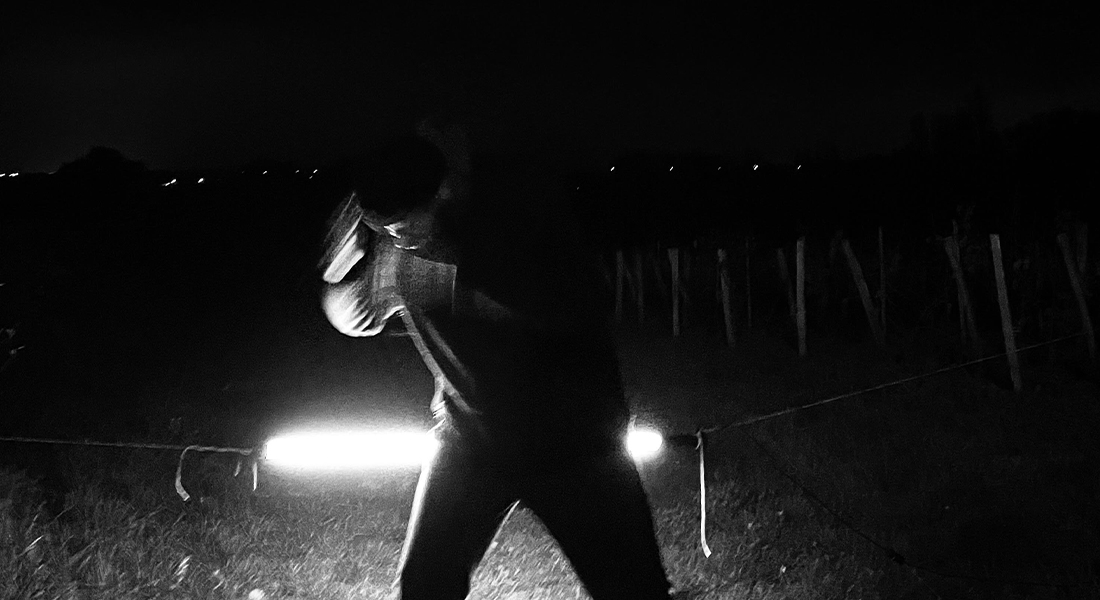 Nuit Ocean : a pseudonym that immediately places the listener in an emotion-inducing & ethereal realm. It is the pseudonym of an artist that we have been following since his very debut at hauméa, an artist whose music aims to be emotional, and whose feelings are transcribed in the multifaceted electro-pop music he offers his audience. From his lyrics in English to the saturated visuals and cinematographic atmosphere of his music videos, Nuit Ocean’s art deeply moves those who listen to it ; he is about to release his new mini-album “Imaginary Friends” on the French indie record label Rouge Néon Records tomorrow, and has agreed to unveil for us today the music video for “Imaginary Friends”. We’ve even asked him a few questions in order to get to know more about the project he’s about to release !

From the get go, “Imaginary Friends” brings us right into the heart of Nuit Ocean’s universe : some ethereal vocals come to haunt the listener right from the beginning of the track, and to these vocals is quickly added an electronic rhythm, which is inspired by what the trap music movement does. And because it wouldn’t be a Nuit Ocean track if it didn’t have his singular voice on it, we don’t have to wait for long to get to hear it ; we’ll notice that in the music video, his voice comes with those signature yellow subtitles that are to be found, over the images we see, in vintage movies. The music video itself is saturated and colorful, which again honors a whole movie era, as well as those of his favorite film director, who is none other than David Lynch.

If you have been following Nuit Ocean for a long time, you’ll probably notice that there has been a slight shift in his music direction ; in order to find out more about the music journey he’s been on since the release of his debut EP “Island” and in order to learn more about his upcoming mini album, we’ve asked him a few questions !

1. Hi Nuit Ocean ! Thank you for accepting to unveil the music video of “Imaginary Friends” before its official release tomorrow ! Before we get started, can you introduce yourself in a few words for those who don’t know you yet ?

Hey ! I’m Steve, I’m behind the Nuit Ocean project. I am a producer ; I compose, write and sing, and I also take care of the visual universe of the project: video, graphics and photography. I’m signed to Rouge Neon Records, with whom I’ll be releasing my mini-album “Imaginary Friends” tomorrow.

Imaginary friends is a mini album that I’ve made having a lot of fun. I experimented with new things, without overthinking it. I’ve realized that I had a wide range of possibilities with my project, so I enthusiastically explored things like singing and producing. In these 6 songs, I tell stories that are more or less inspired by my own life experiences… Love, death, time, identity are being talked about in there.

3. As for the track itself – “Imaginary Friends” – how did the writing process of this song come about ? I see that the lyrics are about someone that you (or a fictional character, maybe) is trying to forget, but who keeps haunting your thoughts & your peace of mind. How is the name of the song related to the lyrics, exactly ?

We always have someone we’re trying to forget about… For our own good, or for the other person’s good. Without talking too much about myself, I talk about my personal experience but it remains quite universal ; everyone can relate to these words. We all experience the same things at different times, and that’s what interests me in the writing process.

4. And on top of that, the melody and its instrumentation is quite close to what trap music artists do ; it’s less introspective and a lot more assertive than what you’ve released before ! Where does this “artistic shift” come from ?

“Others always do it better”, I must say… We rarely feel like we are the right person to try new things in music. The French media are very good at putting artists into categories, very quickly. So as artists we often try to escape that… I’ve always tried to be unique. For “Imaginary Friends” I felt like doing what I like to do, what I like to hear. This piece is totally in tune with who I am right now. I accept myself much more, musically speaking, today. I compose what I am.

5. The music video for “Imaginary Friends” has you driving a car towards an unknown destination – well, unknown at least to the person watching the music video. Where are you headed exactly ?

I’m a huge fan of David Lynch and his aesthetic. I’d say I’m heading into one of the unaired scenes from “Mulholland Drive” or “Lost Highway”.

6. How was the aesthetic of the music video been chosen ? I’ve been following you since the release of your first single and I know it has this specific color palette that has stuck with you since the beginning – these bright, saturated pink, blue and purple hues. Where did this artistic identity come from ?

Since I’m a kid of the MTV generation, that’s always stuck with me. The VHS, the imagery of the 90s movies. I grew up with it, so it speaks to me because, above all things, I feel good in this universe.

7. I know your mini-album is just about to be released tomorrow, but what can we expect from you in the near future ? Is a tour or at least a few live shows on the way, especially now that the pandemic seems to be coming to an end ?

I will be much more productive that’s for sure, so I can already say that new songs are to come out very quickly !

8. Finally, and this is because I also like to let artists express themselves & let them introduce artists to the magazine’s audience : is there an artist that you’ve been keeping an eye on lately, and why ?

I’d first mention the artists of Rouge Neon Records ! John Ducasse (John and the Volta) and Vimala specifically, because they are super talented and have great things to offer. You have to be curious when you’re making music. And otherwise, I’ve had Rosalia’s latest album on repeat !

We leave you with Nuit Ocean’s first EP, named “Island” and which has been released in 2017 – the EP that gave birth to a unique artistic identity and which showcased a sensitive soul to the world.

Nuit Ocean is to be found on all streaming platforms. You can also follow him on Instagram !