Underscope : the platform that wants to professionalize and promote members of the electronic music scene

The electronic music scene mostly lives off live performances. Playing in clubs, festivals, concerts … these are some of the best ways to reach an audience and to earn money. Yet, these venues and events have been shut down and canceled due to the ongoing global pandemic, leaving many artists on the sideline, sometimes without any income. So how can we ensure that these artists continue to make a living off their music ? Well, Underscope has decided to fight for them. Underscope is a French platform that supports local independent labels that are producing electronic music by ensuring that their royalties are correctly distributed, and also by allowing them to be paid for an activity too often put aside because it is considered unprofitable: physical and digital releases.

Underscope so far supports 50 labels in publishing, distribution and communication.

The Underscope platform was founded by Brice Coudert, the former artistic director of Concrete and Dehors Brut which were two legendary venues for underground and electronic music lovers. David Coudert joined forces with David Bossan, member of the publishing structure District 6. To support the first 50 signatory labels, they hired a staff capable to provide services such as community management and press relations. They hope to reach 100 members by the end of the year, a largely achievable goal given the services that the platform offers.

But what does Underscope do?

Underscope is a platform that supports French artists and French labels with their releases on almost every aspect of a music release for those who decide to sign with them. Thus, they publish, distribute, and communicate the same way a media would, and on various channels. These channels are the streaming platforms – Underscope has accounts on Spotify, Deezer, Apple Music, and Youtube. Being so present allows them to promote the releases of their members on their increasingly influential playlists, one of the most effective tools for musical discovery in the digital age.

“We have an educational role to play on this matter. Electronic music is poorly referenced on the major streaming platforms, although it is widely listened to. For example, it is not possible to discover music by searching a label’s name on these platforms, although it is often how electronic music is discovered. ” – Brice Coudert for the French newspapers Culture Matin. 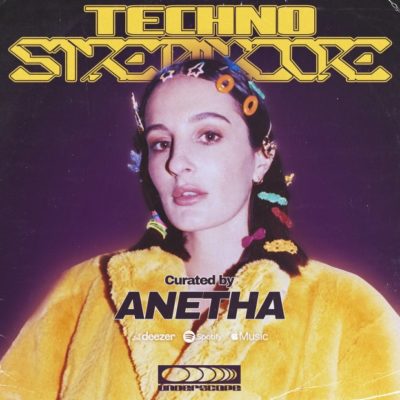 The first playlist Underscope unveiled has been curated by the DJ and techno producer Anetha.

To better understand the will to develop physical and digital releases, let’s take a look at the major French study carried out in 2016 on the weight of electronic music in the revenues generated by the music industry in France. It indicated that more than 80% of electronic music revenues were generated by plays in clubs, discotheques, and festivals. Where does streaming fit into all of this ? Far, very far behind (look for the orange zone). 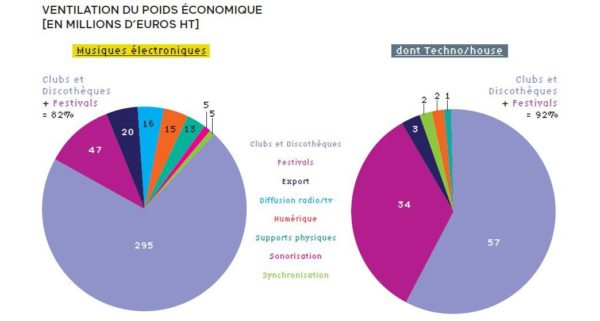 The first graph represents electronic music at large, while the second one accounts for the techno and house genres only. The numbers represent the total income of each category in millions of euros, without taxes.

Underscope, a structure distributed by Believe and supported by Sacem, the French equivalent of PRS or BMI.

To fix the lack of representation of electronic music on streaming platforms, Underscope partnered with one of the most powerful independent digital distributors: Believe. Underscope works hand in hand with their teams to ensure that their labels and artists are featured in big playlists and that they are properly highlighted. Getting on an official playlist is the turning point for an electronic artist since it’s one of the best ways to get your music listened to at a time when venues are closed and events are canceled; a partnership like this could be a game-changer in the long run.

When it comes to publishing, Underscope partnered with Sacem – the equivalent of PRS in the UK or BMI in the US. Since a significant number of labels do not have a publishing branch or a publisher, they, therefore, miss out on proper royalty distribution. Having Sacem on your side gives you an advantage, not only for copyright tracking but also for raising funds for your upcoming artist (Sacem has several funding programs for French artists and publishers). Sacem had already announced in the past that they wanted to support the French electronic scene. This partnership says a lot for the future of electronic music in France, given the fact that in 2015, Sacem devoted 225,000€ of aids to electronic music, or only 7% of its commitment to pop music.

“We also presented the project to SACEM a few months ago, they were very impressed and are already helping us financially. […] we will manage the digital distribution of all these labels via our partner Believe, and above all working full time to do things that will make all this music more listened to, and therefore generate more profit for our labels. “ – Brice Coudert for Tsugi Magazine

These unique partnerships will certainly attract a good number of labels to Underscope. The structure elevates the industry to new heights, and it also gives hope to its members. It will professionalize the scene, create a lot of networking opportunities, and gather them around the same goal.

“The resources (human and financial) that we are going to deploy will therefore bring an unprecedented strike force to our scene and allow it, we hope, to make a better living off its music and to develop artistically.” – Brice Coudert for Tsugi Magazine. 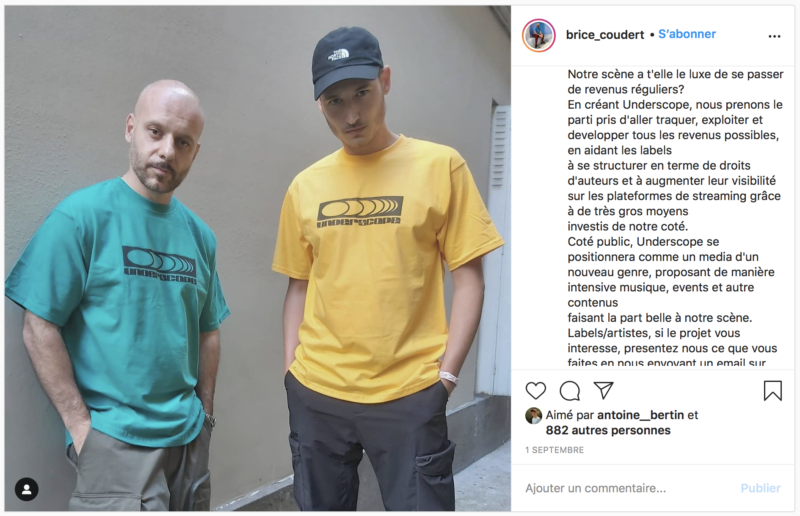 It all started at the end of 2018 during a discussion with Quentin Courel, when we were trying to find solutions to help French labels and artists develop better … Here we are 2 years later, with a concrete project ready to be launched, a large team, more than fifty labels signed or in the process of being signed, and a large support from SACEM.

Due to a lack of organization and invested resources, our scene remains in an economic precariousness whose only income is based on a lot of grinding and live performances, often supplemented by small jobs on the side.

While it had become completely natural for everyone that underground music itself no longer brought in income but simply visibility, gigs and therefore fees, covid quickly showed us the flaws of this system. Without live performances, without income and sometimes without even the security of the intermittent status, many underground artists have found themselves in dire financial situations very quickly.

Does our scene have the luxury of avoiding regular income?

By creating Underscope, we track, exploit and develop all possible incomes, and we do so by helping labels to structure themselves in terms of copyright and increase their visibility on streaming platforms thanks to very big resources invested on our side. On the public side, Underscope will defend itself as a new genre of media, offering music very frequently, promoting events and other content to better showcase the electronic scene.

Labels / artists, if you are interested in Underscope, tell us what you are doing by sending us an email on Contact at underscope dot fr! For you music-lovers, stay tuned, we will soon be flooding you with great music in many different forms!