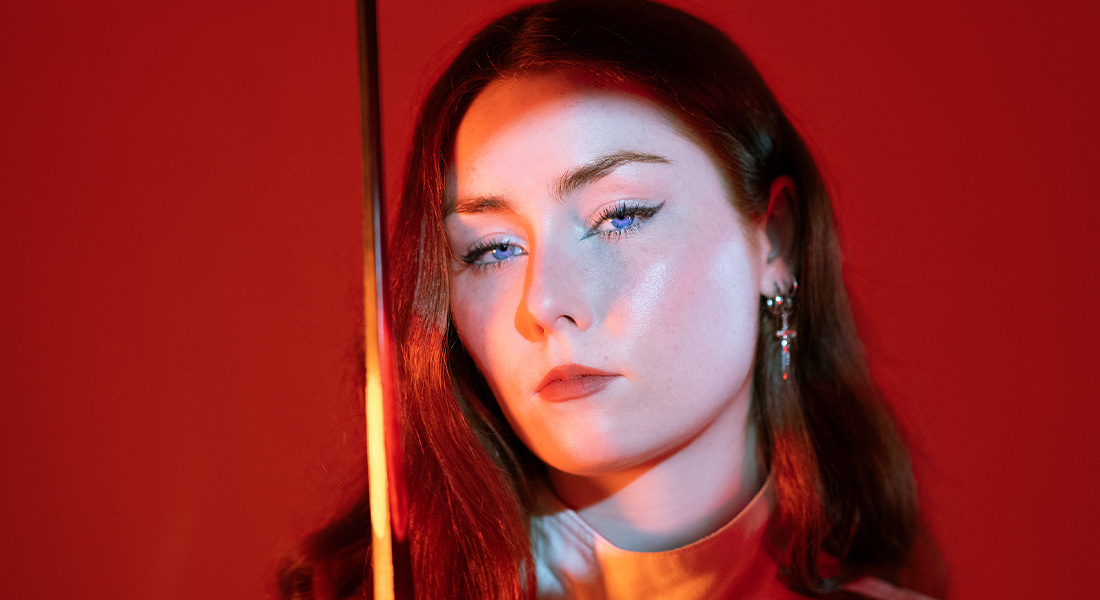 Track premiere : Maya Yenn recalls her darkest and deepest nightmares on her newest track “How Much Sadness Can You Swallow?”

Dreams, nightmares … a gold mine in terms of inspiration for many artists who sometimes decide to turn them into songs. Whether they are lucid dreams, whether they refer to a particular person, or whether they tell the story of a fictional character, the messages that are found in the tracks that refer to vivid and detailed dreams are always intriguing. Among this obscure – if not occult – category, there is the latest single from a young English artist by the name of Maya Yenn who’s about to make her entry ; named “How Much Sadness Can You Swallow?”, this song which will be released tomorrow on all streaming platforms recalls the memories of an old & vidid nightmare, a story she tells on an daring alternative pop beat that strongly reminds us of the beginnings of Florence + The Machine. Get to listen to it before its official release below !

Following her first track “tiptoe”, Maya Yenn sets on “How Much Sadness Can You Swallow?” an atmosphere that is both cinematic and rhythmic, also more pop and more alternative than her previous release. Starting off almost solely with her singular voice, it is only after a matter of seconds that Maya Yenn’s voice splits and overlaps, which reminds us of what Billie Eilish as well as Florence + The Machine may do on some of their tracks. This intriguing contrast deepens as the lyrics develop – which tell of a nightmarish experience of a hell-like place – leaving the bass and drums surrounding them to envelop her listener.

In order to learn more about the story that lies behind this powerful second release, we’ve asked Maya Yenn a few questions !

1. Hi Maya ! Thanks for accepting to premiere your latest track with us today ! To start with, would you mind introducing yourself for those who don’t know you yet ?

Thank you for having me and sure! I’m an alt-pop artist based in the UK. I’ve been making music for years but only plucked up the courage to put out my debut single earlier this year. I basically try to make weird pop music.

2. “How Much Sadness Can You Swallow ?” is your sophomore single ; before hopping right on to it, I would like to go over your very first single, “tiptoe”, which is a single that is both electric yet calming, and that talks about anxiety. I assume before releasing this track that you had a lot more tracks up your sleeve. What made you choose this one for your first release ?

A few people have said “tiptoe” was calming for them and it’s so funny to me because I wrote it with all my worst fears and anxieties front of mind! I’m glad it has that effect for people though. It’s probably the ASMR-style whispering that does it. And you’re absolutely right, “tiptoe” was not the first song I wrote for my solo project – that’s still to be released! “tiptoe” had to come first though because of how quickly it snowballed on TikTok. I first made a “spooky beat” over Halloween last year using samples from around my house; a creaky door, twigs snapping, a candle being blown out etc. It sort of went viral; I had over 130k likes overall, and I knew I had to strike while the iron was hot and get the full song out there. I’m a real perfectionist and it’s stopped me getting stuff out there in the past, so having people inter-ested in the music really helped me to just bite the bullet and just go for it! The original samples from that first TikTok video are actually in the final song.

Similar to Maya Yenn : Ophelia’s Eden portrays emerging feelings for a loved one on “Honeymoon”, her second single

3. Now, “How Much Sadness Can You Swallow ?” is quite different from your previous one, and you’ve said that it is heavily inspired by a vivid nightmare of yours. Can you tell us more about it ?

Yes! ”How Much Sadness Can You Swallow?” was inspired by a nightmare I had years ago about hell. I’m not a religious person at all but the concept of hell has always fascinated me. In the dream, I woke up in this old house and couldn’t remember who I was or why I was there. Then I realised there was someone following me, he attacked me but I managed to beat him in the scuffle. I remember feeling really guilty. I was banging on doors and windows to try and escape but nobody could hear me and I realised I was in hell living the same day over and over again, my memories wiped overnight. It was completely terrifying, totally Black Mirror-worthy ! I had to write about it just to get it out of my system.

4. And did you write it out immediately into a song or did you tweak it for it to fit the energy you wanted to give it ?

Given the subject matter, I wanted the energy in the song to feel manic, somewhere between threat and celebration. Kind of ecstatic and intense – sort of like how you feel at the end of watching “Midsommar” (2019) or “Annihilation” (2018). I had these three dark-sounding chords and a creepy couple of oscillating notes over the top of them I’d written separately that just fitted perfectly and went from there.

I worked with another producer collaboratively on the production. I remember when I first sent Michelangelo the track I’d produced he said “how wedded to the bass are you?” I told him to go for it and he came back with that crazy seismic, shuddering bass! It was too good to pass up and it just elevated the track so much. He’s such a talented producer and I can’t wait to work alongside him again.

5. To go even further on that matter : what made you name the track the way you named it ?

I actually originally named the song “Brother Left Hand” after a line from a film from the 1950s called “Night of the Hunter”. It’s about this religious fanatic reverend who moonlights as a serial killer and targets women in order to steal their money. He has this great biblical speech about love and hate with the words tattooed on his right and left knuckles respectively. For a song about hell I thought it was perfect and originally included a sample of the speech in the track. You can look up the clip on YouTube!

I couldn’t get the sample cleared for copyright so without the sample of the speech, the title, “Brother Left Hand” didn’t make much sense anymore. “How much sadness can you swallow before you get a stomach ache?” is my favourite lyric from the song and is very indicative of what I was feeling at the time when I wrote it, so the title was born from that. I think I prefer it now! It’s funny how things often work out that way.

6. “How Much Sadness Can You Swallow ?” is a track that you started working on 8 years ago. What made you want to release it, after all these years ?

Now that I’m finally releasing music I couldn’t not let the song have it’s moment. It’s a really important song to me and the idea of not giving it to people was too sad ! And after sitting with it for so long it’s taken on new meanings for me as I’ve gotten older; loss, self-blame, grief, new beginnings, self-love and power. I hope it does the same for other people.

7. All tracks put aside, I’m curious : what inspires you on a daily basis ? Are you inspired by your daily life ? By stories you’ve heard ? Or by some artists you follow ?

Everything I can get my eyes and ears on ! I love stories though, reading novels, watching films or just listening to new music. Stories are irresistible and I find it easiest to write when I have a good story in mind. I think because the nightmare I had was so fully formed, ”How Much Sadness Can You Swallow?” was almost easy to write – I’m not always so lucky when writing other songs and have to find the narrative to get going.

8. I know you’re just about to release this track, but what can we expect from you in the near future ? Is a music video on the way for this track ? Or are you working on more songs ?

Yes we’re hard at work on the music video for “How Much Sadness Can You Swallow?”! I’m a big fan of contemporary horror and sci-fi cinema as you may have guessed so we’re being very ambitious and trying to make a music video that pays tribute to that – there’s going to be VFX and a ton of running ! James (cinematographer and editor) and I have been shooting it over Summer and running in 30 degree heat was not fun ! We think it will be really worth it though, it’s already looking really cinematic. I also already started work on my next release ! It’s a bit of a departure for me and blends two genres you might not expect…

9. Finally, here’s a question I like to ask when my interviews come to an end : is there an artist you’ve been keeping an eye on lately ?

Audrey Nuna is fire. She’s a Korean-American alt-R&B singer and rapper and she never misses. I’m obsessed with her track “Blossom”, it’s just under 2 minutes long but packs a punch. I have a real soft spot for rap, I love how playful it can be. When I get back to writing I’d love to take more cues from R&B and more upbeat artists like Still Woozy and Glass Animals. My stuff has been pretty dark recently so it’ll be fun to try something different — although I don’t think you’ll catch me rapping anytime soon !

Maya Yenn is to be found on all streaming platforms. You can also follow her on Instagram !