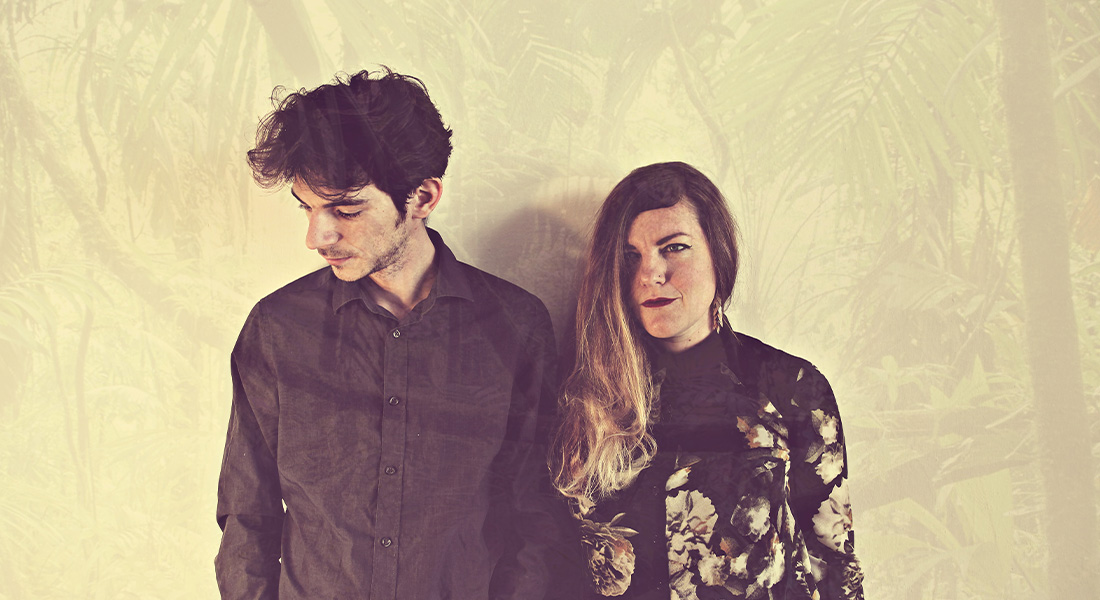 We have introduced them a few weeks ago : the duo Overland Inn caught us by surprise on “Les Mauvais Jours”, a track which affirms a complete change in their music direction, as we saw them leave pop rock behind for French electro pop. Based in Prague, the duo is about to release tomorrow on all platforms a single called “Dans tes yeux”, a way for them to also highlight their complex way of producing music. Between sounds recorded on the spot and the quasi absence of digital post-production, their music sounds both heartwarming and dreamy. They have agreed to premiere for us their upcoming track “Dans tes yeux”: listen to it below before its official release tomorrow !

Both calm and fast-paced at once, “Dans tes yeux” catches our attention from the get go thanks to a formula that sways between a dreamy ambiance in the words and the voice, and between a state of rush in the melodic loops we get to hear in the background. Blending many aspects of what the French electronic pop music scene does best into its first few seconds, the more time passes the more the song switches to something closer to electronica, letting the listener’s imagination put images on the words and notes that unfold before their eyes. Contrasting with the track “Les Mauvais Jours” that was released just a few weeks ago, the Overland Inn duo confirms their new musical aesthetic as well as their desire to tell their feelings in French !

In order to learn more about the history of the duo and to learn about their artistic decisions, we’ve asked them a few questions.

1. Hello Overland Inn ! Thank you for agreeing to premiere “Dans tes yeux” for us ! Before we start, could you briefly introduce yourself to those who don’t know you yet ?

Chloé : Hi ! We are Etienne and Chloé, we are French but we currently live in Prague, Czech Republic. We formed the Overland Inn band, which has traveled and grown with us since 2006. We’re releasing our 4th album this year, and we hope you’ll like it !

2. You have been performing as a duo for several years, and I know that your music has grown according to your life experiences, and more specifically thanks to the many trips you’ve been on. What makes you want to travel so much ?

Chloé : Since I was a child, I have never lived anywhere for more than 3 or 4 years. My parents traveled a lot (I was born and I grew up in Africa until I was 15). So I imagine that I kept the movement going, and I have this appetite for change ! I have always loved the “vacation” feeling that living in a new city or in a new country gives. Being submerged in a new culture and meeting new people is a really nice feeling.

3. Today you are both living in Prague, a city from which you wrote your upcoming album that is about to be release next January, and from which “Dans tes yeux” comes from. Could you tell us more about what made you choose to settle in Prague and how this city has influenced your songs ?

Etienne : Prague is an ambivalent city, a bright city with a dark past. It is the cradle of revolutionary, pacifist, democratic, scientific utopias, which can be seen in art-nouveau, functionalist, art-deco, and even cubist architectures, in the SF of the 1930s, in political sculptures kind of everywhere. But it is also a city that has been profoundly shaped by communism, capitalism, and deportations. You can go & see punk live shows in Soviet bunkers, or SF operas. I think this ambivalence that can be found in our latest album, as well as in the one that will be released in January.

4. Let’s move on to “Dans tes yeux” : it’s an electro-progressive ballad on which the lyrics are neither descriptive nor metaphorical, but are definitely a bit of both. What inspired the lyrics ?

Chloé : I am often inspired by my dreams or by feelings that are related to a song, a movie or a book. Our songs also talk a lot about relationships between people. I sometimes bring up our own relationship, because it is very fusional and I love to write love songs. But I also really enjoy exploring more complex, difficult, toxic relationships even, and using the emotions and feelings that come with them in our songs.

Similar to Overland Inn : We have talked with Toboggan, an indie French duo that makes sweet retro songs for romantic minds

Etienne : Movies have always inspired us. For the first album, we were more inspired by westerns and road movies. Right now I listen to a lot of movie soundtracks, like those of Max Richter, Hans Zimmer, or Philip Glass, so I guess it had to be heard in our music as well. Chloé’s lyrics are always very descriptive as well, so it pushes me to use a lot of textures and create a cinematic universe.

Chloé : Movies and books are my main source of inspiration… and I can’t help visualizing scenes, stories and even characters when I write a voice melody for example. I try to “play” the scene in my head while singing it. Music and images are completely linked in my mind.

6. And does “Dans tes yeux” hold a special place in the album ? Does it have a broader meaning, when it is put next to the rest of the songs of the album ?

Etienne : It’s the first song on the album, and we wanted to highlight the visual aspect we just talked about. The whole album was created from the same sound materials, and has the same “colors”. For example, many of the synths on the album are actually the sounds of animals (frogs, birds, etc.) that are passed through a granular synth in order to be turned into melodies. The other instruments are old analog synths that are a bit worn out or that have an electric noise to them. You hear their imperfections and they give the songs a personality, like characters in a movie. We tried as much as possible not to use computers on this album, even for the mastering part, because we wanted to preserve the personality and colors of the sounds, even if the result sounds less “clean” than digital melodies. Each synth has a “soul” and the melody they play is never the same on each track. These little variations are very important to me, and “Dans tes yeux” is perhaps a way of asking the listener not to listen to the album just with his ears, but to look for the animals in the sound material, to imagine the scenery, and to take a deeper look at the synths.

More of Overland Inn : Overland Inn go back to their French roots on their melancholic electro-pop ballad “Les Mauvais Jours”

7. I know you are just getting ready to release your track, but what can we expect from you next ? Should we expect a few live performances for example ? Or remixes, maybe, in the upcoming weeks ?

Chloé : We hope to be able to perform on stage again ! Covid has been really difficult on us for that. Then, a new project arrived in the meantime (a second child), but in a few months it will be a pleasure to play again for the public ! We miss being on stage.

8. Finally, here is a question I like to ask when my interviews come to an end : is there an artist you’re keeping an eye on lately, and why ?

Chloé : I listen to a lot of Clara Luciani. Her music is exciting, her words are beautiful and they move you. Malik Djoudi is also a role model for us. We’re from the same city, we’ve seen him work hard and grow from there. His songs are also very colorful, cinematographic…. We have that in common. I could also quote Blonde Redhead, and more recently Charlotte Gainsbourg. I lost my dad recently and her song “Lying with you” really moved me.

Overland Inn is to be found on all streaming platforms. You can also follow them on Instagram !