The Crossroads Festival will be back for a 7th edition from the 8th to the 10th of November in Roubaix, North of France

The Crossroads Festival : a festival that we are particularly fond of at hauméa, especially because it is entirely dedicated to the promotion of both the local scene of the North of France and its neighboring countries, including Belgium, but also Germany – and this year, an African country, the Democratic Republic of the Congo, will also be represented ! By taking advantage of its strategic geographic location in Europe, the festival gathers a rather cosmopolitan audience, as well as a large number of artists and professionals. The festival comes back this year from the 8th to the 10th of November at the venue where it all started, La Condition Publique in Roubaix, for a 7th edition with an eclectic artistic curation as well as a series of professional meetings showcasing some of the main subjects at hand right now in the music industry. Let’s see what awaits us in November – and if you live nearby, you can get your tickets for the festival today ! 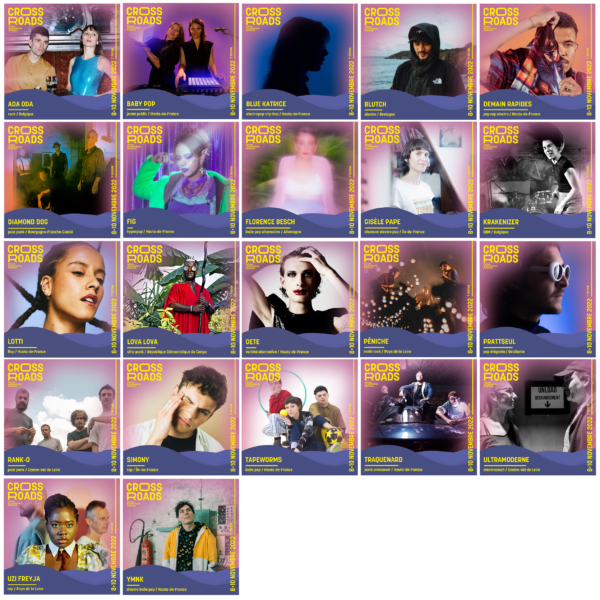 As we’ve mentioned right above, the Crossroads Festival is known for its eclectic artistic choices, a curation choice which stems from the desire to showcase the wide range of emerging talents there are to be found on today’s European scene. And if last year the concerts had exceptionally taken place in the Salle Watremez next to the Cave aux Poètes – a local venue known for representing & supporting the local rap & hip-hop music scene – this year, all of the showcases will take place at the Condition Publique, a venue that has been working hand in hand with the festival since the very beginning.

When it comes to the artists & the music genres that are being highlighted this year, 22 artists will perform on the span of 3 days ; 7 artists are from the local scene of the North of France : you’ll get to enjoy the electro pop tunes of Blue Katrice as well as the indie pop of YMNK, but also some other music genres that are quite difficult to enjoy live since they’re not often programmed, such as hyper pop, whose sounds will be represented by FIG.

The national French independent scene will also defend the sounds of electronic music aesthetics, but also of more organic-sounding genres : rock and its sub-genres have always held a special place in the Crossroads’s heart, and this edition will be no exception. Emerging artists such as PÉNICHE, Diamond Dog and Rank-O will represent their colors.

As for the 4 international artists that are programmed for this 7th edition, apart from Florence Besch and her alternative indie gems, three groups & artists will be ready to have the crowds headbanging to rock (Ada Oda), EBM (Krakenizer ) and afro-punk sounds (Lova Lova) while representing their countries.

And, as we’ve said, the Crossroads’ program is eclectic but also very thoughtful : a kids live show has also been included in the list, and it will take place on November 8th ; the local duo Baby Pop will be performing an electronic music play for their (very) young audience.

All the artists that will be performing in November can be found on the festival’s official playlist on Spotify !

Then, when it comes to the professional meetings that will take place during the day & before the concerts– and which have always taken place at the ARA as well as at the Media Library of the city of Roubaix – this year, they are also open to the public : you can grab yourself a pro pass in order to attend them ! This new decision makes the pro meetings accessible to any person wishing to learn more about the cultural and musical dynamics of the local, national as well as the European scene !

The Crossroads meetings are always organized around a specific theme, which always has to do with the development of musical projects at the local, national and international levels. This year, the three days of meetings are conducted as such : November 8th will be centered around the issues musicians encounter in their career & they will take place at the ARA, November 9th will specifically deal with programming artists & their media representation and will take place at the Media Library de Roubaix, and on November 10th, also at the Media Library, the day will be entirely dedicated to how to represent artists abroad and have them flourish outside of their country. Many partners will join the music pros on these talks & meetings, starting with key institutions such as the National Music Center, the Sacem (local equivalent of PRS in the UK or ASCAP & BMI in the USA) but also local companies such as Haute Fidélité.

So, we don’t know about you, but we can’t wait to be there ! Shall we see you in November in Roubaix ?

Read last year’s festival report : We attended the European event that is the Crossroads Festival from the 7th to the 10th of September !

Buy your tickets now for the Crossroads Festival on their website. And don’t forget to follow the festival on Instagram to be notified of their latest news !