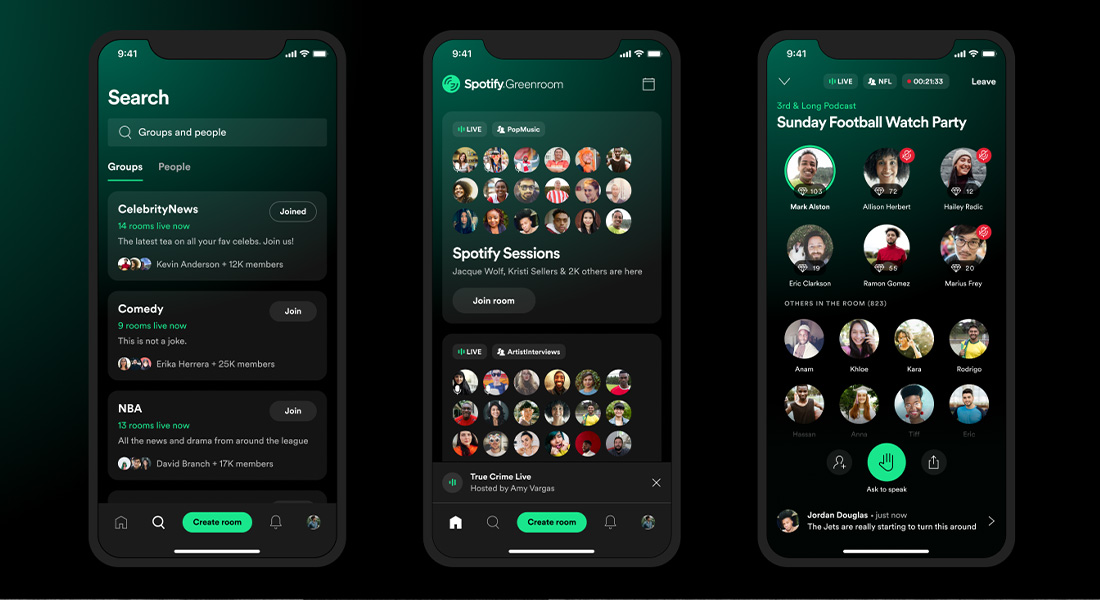 No streaming platform had created its own social media yet. SoundCloud was the closest platform to a social media – with the possibility of leaving comments and reposting your favorite songs and mixes on your profile – but Spotify largely surpassed it. Spotify indeed launched on June 16th its very own social media app called Greenroom, an app based on audio interactions and live chats, which comes very close to Clubhouse in terms of concept and features. Greenroom’s creation could see the light thanks to the acquisition a few months ago of the Locker Room platform, an app launched at the end of October 2020 that was also based on audio & live interactions, except that it revolved exclusively around sports.

Greenroom is designed to make discussions happen between Spotify users (but not only). In fact, Greenroom allows those who download the app to create and/or join “live rooms” in order to discuss topics ranging from music to sports to culture and entertainment. If the application reminds you of the very select social network that is Clubhouse, it’s normal : Greenroom comes very close to what Clubhouse is. However, you don’t need to be invited to Greenroom to be able to use the app : it is available to everyone, whether you have a Spotify account or not. Live rooms, categories & topics, endless possibilities for creation… Let’s have a look at what this new social media has to offer.

“Talk about the music you love. Debate fantasy sports picks. Create rooms for your friends. Be heard on your favorite topics.” – Spotify about Greenroom’s features.

These short sentences make for the key words of the new social platform that Spotify just launched last week, and these words that say a lot about the features of the latter. Greenroom allows, just like Clubhouse, to create a “room”  that you are then going to link to a subject or a category (let’s say : music production). You can then invite your professional or friendly entourage to come and chat with you, and you can also let public users on the platform come and listen to your discussion. What’s more ? If you have associated the subject of your room with one of the main topics of the platform – music production being one of them – all users who have selected this topic as one of their favorite subjects will then be notified of the creation of your room. And if you missed the start of a discussion of them or if you want to see more of what a specific user has said & done, their discussions are available after they’ve been broadcasted live and you can listen to them as a podcast afterwards.

Similar to Greenroom by Spotify : AKIUS takes over this afternoon the iconic Salle de Billard of the French venue l’Olympia to live stream Emma Hoet, Sidoine, Alvin Chris and Bomel.

But Greenroom goes further than just allowing people to discuss publicly between them. You can also “like” the rooms you joined by giving “gems” to them. The total number of gems will then be displayed on the profile of the user and/or the room to which you have given them to. It’s a simple and effective way for everyone to find out which rooms & users are getting the most attention on Greenroom.

We also have noticed that Spotify tends to be more and more present & relevant in the sports realm : if the acquisition of Locker Room wasn’t enough, sports are also mentioned in their tagline, and we also notice that they are to be found on many screenshots that showcase the app’s main features. Is Spotify trying to attract new customers & audiences through Greenroom ?

No matter what they are trying to reach while implementing themselves on the sports market, it goes without saying, Spotify is getting more and more diverse and is trying to appeal to different target audiences. After showing a strong interest in podcasts these past few years, Spotify insists on its ability to gather people around specific subjects and themes and thus entertain its users. The music streaming mogul even intends to raise funds to allow Greenroom creators & broadcasters to develop their activities even further.

A “creator friendly” social media app : Spotify intends to raise funds this summer in order for its user-generated content to be monetized.

“In the interest of making Greenroom the premier creator-friendly live audio platform, we’re also proud to announce that we will be launching a Spotify Creator Fund, which will help live audio creators monetize their work. Anyone who is interested can sign up to find out more about participation when the Creator Fund opens later this summer.” – Spotify about their fundraising operation to monetize content on Greenroom.

The same way podcasts on Spotify or channels on YouTube are monetized and can become a reliable source of income for its creators, the music streaming giant intends to monetize the content of its platform : another way to attract influencers and aspiring creators. In order for this to happen, as it is indicated on Spotify’s blog, they will be raising funds this summer as part of a “Creator Fund” ; how much is raised will most probably dictate how content will be monetized on Greenroom.

In addition to that, The Verge, the digital magazine focused on new technologies, announced that it would be possible, in the future, for part of Greenroom’s core feature to end up on Spotify. It is yet unclear which feature will eventually end up on the platform, but it’s easy to imagine that the previously broadcasted discussions that are then available as podcasts on Greenroom might end up migrating to Spotify. We’ll keep an eye out for the development of Greenroom whose future will be determined by the overall user experience.

More on Spotify : Spotify wants to promote independent artists on their platform… by taking a cut of their royalties.