MaMA Festival & Convention : the full program & lineup has been unveiled !

The MaMA Festival & Convention is a staple in the French music industry and has been gathering more and more international artists & pros throughout the years. In fact, artists & professionals from the music industry meet there every year around the various music venues that are to be found in Montmartre and Pigalle in Paris in order to discuss the music business’ current issues as well as to discover the new indie music scene live. And this year, the MaMA returns with an ambition & diverse program, aiming to represent the various scales of the rising music scene. On the Convention’s side, this edition focuses, on top of the traditional themes that are covered each year like recorded music, artistic support & funding as well as live music, there are also many panels that will discuss gender equality as well as post-Covid innovations. Here’s a rundown of what will take place from the 12th to the 14th of October !

As we have just said : the MaMA Festival takes over several music venues in Montmartre and Pigalle… and this year, it’s no less than 110 concerts that have been scheduled throughout the three-day event. And as organizing your venue can sometimes seem daunting given the amount of shows that are to be seen – even if the MaMA Festival application greatly helps one out – we have listed a few artists that we consider to be some absolutely must-sees this year.

However, before unveiling our artist picks, let’s take a look at the venues that will host this 2022 edition. Every year, the rooms of the Elysée Montmartre, the Trianon, but also La Cigale, the Trois Baudets and more have concerts taking place between their walls. When it comes to electronic and club music, it’s the Machine du Moulin Rouge that you’ll have to keep an eye on, and in terms of professional showcases, it’s at the Bar à Bulles as well as at the FGO Barbara that they’ll take place. And to top it off: the MaMA is partnering again with the Cabaret Madame Arthur, and is inviting among its partners a new one : the NO.PI.

In short, you will be running – just like us – throughout Pigalle to see all of the artists you’ve decided to see ; here is a selection of artists that we warmly recommend you to look out for – the rest of the program can be found on the MaMA Festival’s website, and you can buy your Music pass either on the website or directly at the venues !

Similar to the MaMA Festival : The Crossroads Festival will be back for a 7th edition from the 8th to the 10th of November in Roubaix, North of France

In any case, among the 110 concerts that are scheduled for the 2022 edition of the MaMA Festival, we strongly recommend all the pop fans to take a look at Kalika on October 12th – an artist who’s been seen alongside the French rising pop sensation Joanna on one of her latest singles – at La Cigale ; if you’re a rock music fan, head over La Boule Noire to see Animal Triste’s performance !

We’re also keeping an eye on C’est Karma and their avant-garde electronic pop show, which will take place at the Cabaret Madame Arthur on October 13th. Poppy Fusée will on her side perform at the Théâtre de Dix Heures ; the eclectic and very avant-garde duo Walter Astral, who’s been shortlisted in the top 100 of the Prix Ricard Live Music earlier this year, will also perform at NO.PI that day. On the rap music side, we have to mention the French rap revelation Eesah Yasuke, nominated for the first edition of the Joséphine Prize for her album “Cadavre Exquis”, and who will play on the 13th of October at the Backstage By The Mill ; the same day, the rapper Joysad will perform at the Machine du Moulin Rouge.

Finally, on October 14th, in various pop aesthetics, we will listen to the alt-pop funk set of Czesare at the Bar à Bulles, the enchanting soul voice of Frieda at the FGO Barbara as well as the raw electro-pop emotions of Anna Majidson at La Cigale – an artist who’s recently been announced as one of the winner of the second session of the Fair, and who’s been supported by the European program called Keychange. On the electronic music side, we recommend the artistic performance that S8JFOU will give at the Machine du Moulin Rouge alongside Simon Lazarus for a performance full of visual arts & electronic music ; in the same venue and the same day, we will be following the live performance of Romane Santarelli, who released her first album a few months ago. And, on the rock music side once again, it’s the frenzy group Astéréotypie that will take over La Cigale that evening, as well as Grandma’s Ashes at the Backstage by The Mill.

As you can see, it’s hard to pick who to see live !

The MaMA Convention : three days to go over some key topics & issues of the post-Covid music industry.

The MaMa is also a professional music even who’s accessible to all holders of a Pro pass, which you can get from the MaMA Festival’s website. It allows you, for 150€, to have access to all the conferences, debates & workshops as well as the networking spaces that the festival will organize in its venues, which will allow for lots of meetings & opportunities to learn more about today’s music industry.

The professional event will take place in four separate locations, including three concert venues – the FGO Barbara, the Elysée Montmartre and the Trianon – and one public establishment, the J. Decours high school and its Théâtre de la Chapelle. The stands & workshops will take place as usual at the Trianon !

Among the topics that will be covered this year, there is that of funding and supporting emerging artists & their music – which will be tackled by collecting companies such as SPPF, Spedidam, as well as the National Music Center & the some of the various support systems such as the Fair or the Musiques Actuelles de Paris network. Artists – who will also play at the MaMA Festival in concerts and showcases – will also be given the mic to talk about their own insider experiences !

The live music industry will also be largely featured & its issues largely discussed. From the presentation of the “Live Barometer” by the Observatory of Cultural Practices to the expectations behind livestreams without forgetting the presentation of digital softwares such as Shotgun or Tixngo for managing online ticket sales, all of the aspects of live music will be covered during the event.

Publishing, on its end, will be addressed both to introduced this lesser-known realm to the rest of the industry. Aspiring & confirmed publishers will also get the opportunity to get introduced to various supports systems & mechanics that exist to ensure all of their rights are rightfully collected, as well as to get introduced to the new practices of the Web3.

In between conferences, you will also be able to attend speed meetings in order to get in touch with music production companies – like Grown Kid – but also music supervisors, publishing companies, artist managers and more. Most of these meetings will take place at the Trianon, where many stands will also allow more informal meetings.

The topics of Web3 and NFTs will also be widely discussed, since they have taken a considerable amount of space in the industry these past few years. In short, this edition of the MaMA Convention will allow artists and pros alike to update their knowledge in various fields of live and recorded music!

The rest of the day-by-day program of the Convention can be found on the MaMA Festival’s website. 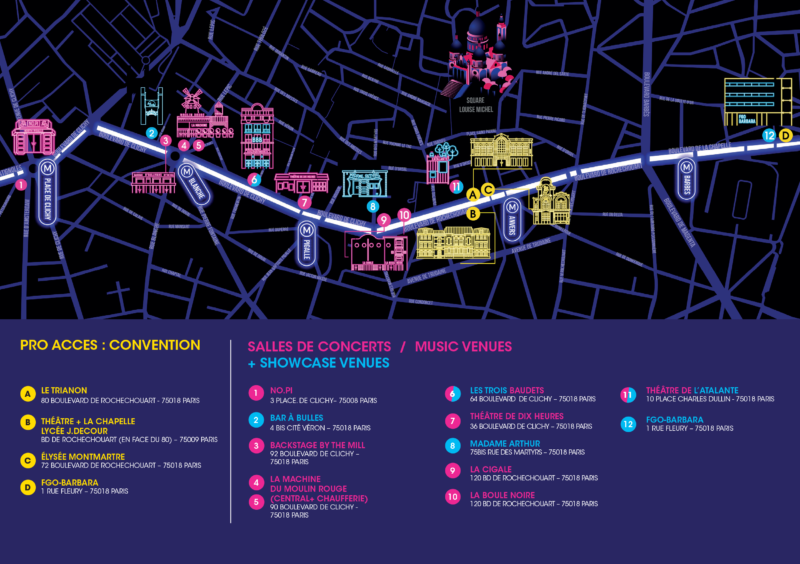 In order for you to find your way around the festival, here is the map of where all of the pro meetings & concerts will take place – we strongly advise you to download the MaMA’s mobile app in order to pinpoint the conferences and concerts that you would like to do on the D-Days !

On our end, we will be covering all of the event. Shall we see you in Paris ?