Majeur•e•s : a digital & professional directory that casts a light on women & gender minorities in the music industry

One person out of three*, out of all the people working in the French music & live industry, is a woman. This is not much, especially when this rate is compared to the rest of France – one worker out of two being a woman – not to mention that women & gender minorities are still poorly considered within these two environments, even when they are as qualified as their male peers. Income inequalities, difficulties in finding business partnerships, lack of visibility, discrimination when being hired and invisibilization for the benefit of men : women & gender minorities struggle to be correctly considered and valued for their strengths & skills ​​within the industry*. And yet, many men have expressed that they would like to work with women !

To try & find a way to fix this lack of visibility and to give women & gender minorities access to business opportunities within the music industry, shesaid.so has been working on Majeur•e•s, a “correctional” & professional directory. It has been introduced to the pros at the MaMA Festival in Paris late 2021 ; Majeur•e•s will be fully launched on May 26th, and is in early access for all those who pre-registered on the website, since May 18th. Let’s dig deeper. 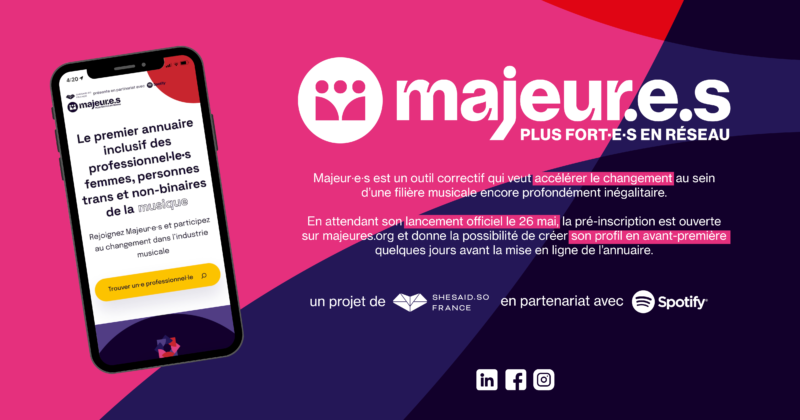 – translation : Majeur•e•s, stronger together. Majeur•e•s is a correctional tool that aims to change an industry far from being equal. While waiting for its official launch on May 26th, you can pre-register on the website, which gives you the possibility to create your profile a few days before the launch. A project by shesaid.so France, with Spotify as an official partner.

Professional directories, in the music industry, are quite hard to find, just like ways to give visibility to women & gender minorities. Thus, with Majeur•e•s, shesaid.so kills two birds with one stone, by showcasing a wide set of skills within the industry as well as people who only asks to be considered the same way their male peers are.

Majeur•e•s has two main goals : listing on the French territory first (before going worldwide) women & people from gender minorities in the music industry, and allow for collaborations for all genders. The directory even meets a need expressed by men in these industries !

Similar to Majeur•e•s : The Artist’s Corner : the French platform that connects artists to music professionals to launch on June 1st !

Majeur•e•s is the result of a collaboration between three people : Marie-Anne Robert, Director of Sony France – the first woman to b in charge of a major in France – Julie Béhérec, Artist & Label Partnerships Manager at Spotify France, and Claire Morel, President of shesaid.so France.

shesaid.so is a widespread community of more than 12,000 members from all around the world – from 18 different countries to be more specific. The collective, in France, has directed various actions, by partnering with Change de Disque, in order to allow discriminated people to have access to careers & expertises. Majeur•e•s will allow them to push their actions even further, and is already supported by several key companies in the French music industry, including Spotify, but also the National Music Center, the Ministry of Culture, Sacem and MaMA Festival.

The directory will be officially launched at the Nuits Sonores festival in Lyon on May 26th.

*official statistics taken from studies conducted by the Ministry of Culture in France as well as professional independent studies carried out within the music industry by the GAM, Cura, Audiens as well as INSEE.