Listening to the favorite tracks of Di Laif, an electronic music producer that brings us back to ancestral times

The more time passes, the more electronic music spreads around the world, and it is even gradually spreading towards other music genres – you’ll commonly hear electronic sounds in pop and in rap music. However, sometimes the opposite happens : the artist’s culture and in particular his music culture influences his productions, flipping the trend around and allowing the listener to immerse himself in another, sometimes completely unknown culture & music. Arab, African and even Spanish music are getting more and more attention ; as for Di Laif, he embraces his Guatemalan culture and uses its rich musical background by using sounds & voices from his culture in very codified electronic productions.

Di Laif is an artist whose popularity has only increased in recent years ; his music has already reached several hundred thousand people on streaming platforms. His music is a sweet blend of a strict application of the codes of electronic music production and of very organic sounds, mostly taken from traditional instruments and voices of native people. He has recently performed live for the French venue Château Ephémère ; we have asked him a few questions & had a look at his most favorite tracks ! 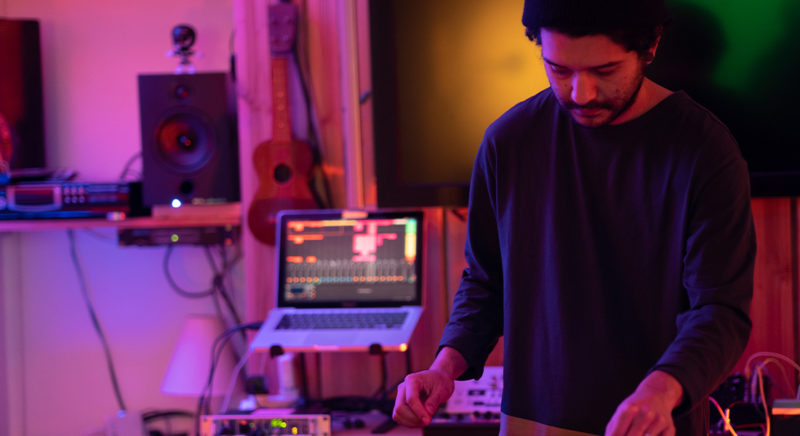 1. Hello Di Laif ! Thank you for taking the time to answer our questions today ! To begin with, can you briefly introduce yourself to those who don’t know you yet?

Hi ! I am a musician from Guatemala. Di Laif is my musical project where I like to mix two of my greatest passions : world music and electronic music.

2. You are from Guatemala and we can hear it in your music ; you have this incredible ability of mixing together organic instruments and electronic productions with ease ! Can you tell us more about your musical education ? How did you develop this artistic touch that makes your track sound so unique ?

I tend to think that my musical education started from a very young age in my parents’ house. Coming from a large, tight-knit family who loves music, there were always family celebrations during which we listened to everything, from hits that were playing on the radio to more underground sounds from my uncles or my dad, who is a music collector. Then, when I was about 15, I started playing guitar and joined several bands. I ended up studying sound engineering, and it is during my studies that I started producing with electronic elements.

Similar to Di Laif : We have talked with Makichi, an iranian duo that has experience the cultural and musical restrictions of Iran.

3. Not only does your music have particular sounds, but you have also been spotted by & signed to several music labels who were always represented by strong & famous artists. How did you get signed on these labels ? Did you send demos or were the labels part of your professional entourage ?

Uff, the relationship with the labels started when I lived for a while in Berlin and met several friends there who had a music label, and I released music for the first time with them. After that, I think everything started to grow, step by step. I started working with Festival Nomade when they came to a festival in Guatemala, and the same thing happened with friends of the Numa label. Obviously I also met some of them through internet, I wrote to labels whose work I very much admire and others contacted me directly to participate in their projects. I think it’s the life we decide to live that brings us to certain people and specific music labels.

4. The last thing you have released so far is a live performance, where we see you perform for Château Ephémère. We see you playing on our screens an hour long live set, and your set is filled with tracks that get more and more hypnotic as the time passes. How do you work, when you make music ? Do you make your tracks in order for you to play them during live performances ?

This hour-long live is the result of a residency I took part in at Château Ephémère. It’s a great place near Paris where I was able to compose for two weeks in their venue. I had a studio full of synthesizers, all by myself, available all day all night ! The goal was to create a whole performance that could be played live and that would explore different ways of making electronic music. It also has a visual aspect as it aims to be a performance in its own right. But I don’t normally make music for it to be played live. It’s quite the other way around actually, I adapt my songs in order to play them live and I like to see the differences between the CD version and the one played in front of an audience.

5. We talked about influences, musicality, artistic performances and collaborations, but we would also like to know what you listen to on a daily basis as well as the tracks that have followed you throughout your music journey ! Can you tell us more about it ?

Here’s a look at some songs I grew up with and still listen to a lot today !

6. Why did these tracks particularly stick with you ?

I think these songs caught my attention a little more than the rest. Maybe because I feel that these are tracks made by artists that have tried to go beyond the established norms, to break the boundaries between music genres, and therefore were in a way precursors to everything we get to hear today. For many of them, they blend several elements, including organic ones, that resonate with us and with which each one might relate to on a personal level.

7. Now that you’ve played at Château Ephémère, what can we expect from you in the coming months ? A new album, for example ?

Many projects are coming up ! Despite the pandemic, I was able to maintain my writing habits and continue to work with other artists. One of them is Dr.Nativo, a great Guatemalan artist who already has had an important career, he works with the label Stonetree Records and we are currently preparing a project together. Of course, remixes are on the way as well, other collaborations, single releases, and I’m starting to work on my next release as well.

8. Finally, last question, which artist do you follow closely at the moment ?

One of the artists I am paying particular attention to right now is the band Grupo Sotz’il from Guatemala. They make super inspiring and political music in Mayan languages, they’re also conducting researches on pre-Hispanic musical instruments (instruments which almost all disappeared after the Spanish colonization).

Di Laif is to be found on all streaming platforms. You can also follow him on Instagram !