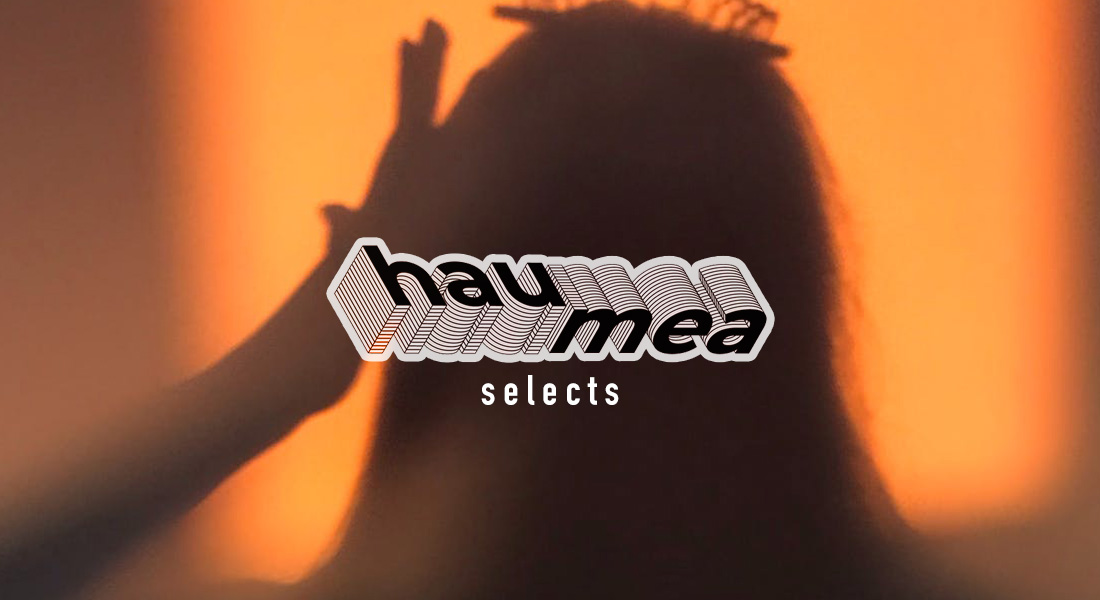 Alternative pop is a music genre that lives up to its name. Sound-wise, it is not too far away from the so-called “popular” music, but it is also the opposite of it, since it incorporates unexpected, daring, and sometimes more experimental musical references. Today, our second curated selection is there to make you (re) discover some of the aspects of the vast universe that is alternative pop.

This time around, we introduce you to artists like Emilia Tarrant, Anna Mae Kelly, Christina Jewell, Mystic Waxx, Ouray and Grace Savage who all recently gave their listeners their own version of pop music. It sometimes comes with acoustic traits (Emilia Tarrant, Anna Mae Kelly), and sometimes more electronic ones (Ouray) ; our curated playlist will make you experience all kinds of emotions ! 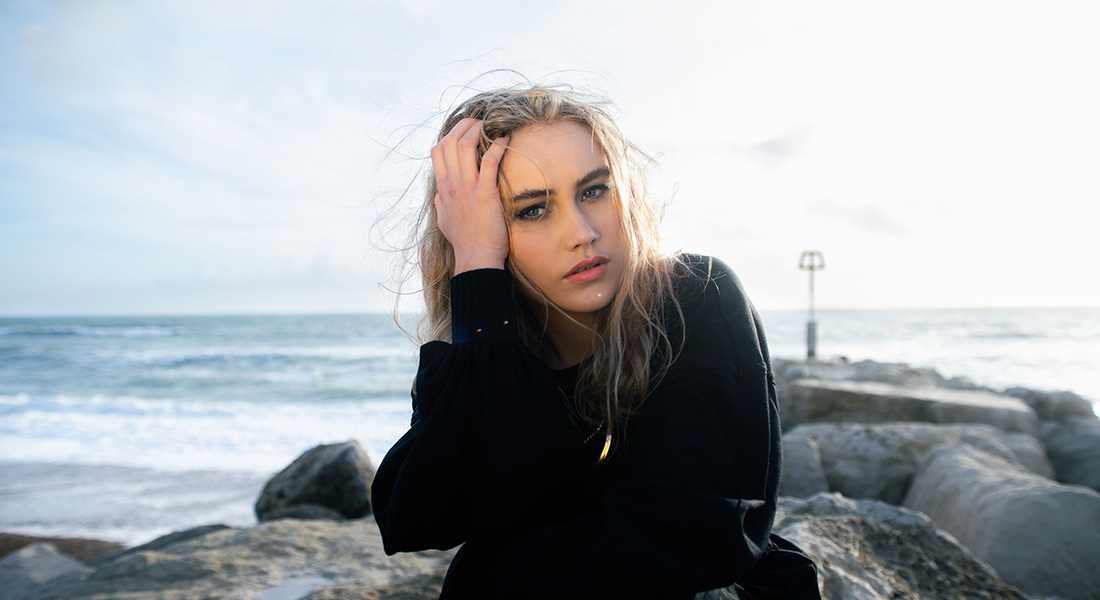 We start off this new playlist with the softness of Emilia Tarrant’s latest single, “Honeymoon Phase”. We are welcomed by a few muffled piano notes ; some electronic variations and an emotion-filled voice end up hypnotizing us at each and every verse. Even if the track itself is essentially acoustic throughout its first half, it is the intensity of the song and the fact that it goes crescendo that got us completely hooked ; the track reaches new heights when a soft kick comes in and completes the initial melody. Moreover, Emilia Tarrant brilliantly tells on “Honeymoon Phase” the rocky beginnings of a new romantic relationship through her lyrics.

“Honeymoon Phase is based on the stereotypical fairy-tale beginning that most new relationships endure, and surviving the end of it. It covers the ebbs and flows of a new relationship, the choice we face whether it’s worth fighting for, as well as the inevitable cyclical argumentative stage“ – Emilia Tarrant about “Honeymoon Phase”.

Based in Winchester, England, Emilia Tarrant has only releases a couple of tracks ; “Honeymoon Phase” follows her first hit “If You Want Love”, a track that has been co-produced by Coldplay producer Danton Supple. With “Honeymoon Phase”, she allows herself to use more instruments than the piano when composing and thus opens up to more electronic and alternative productions. 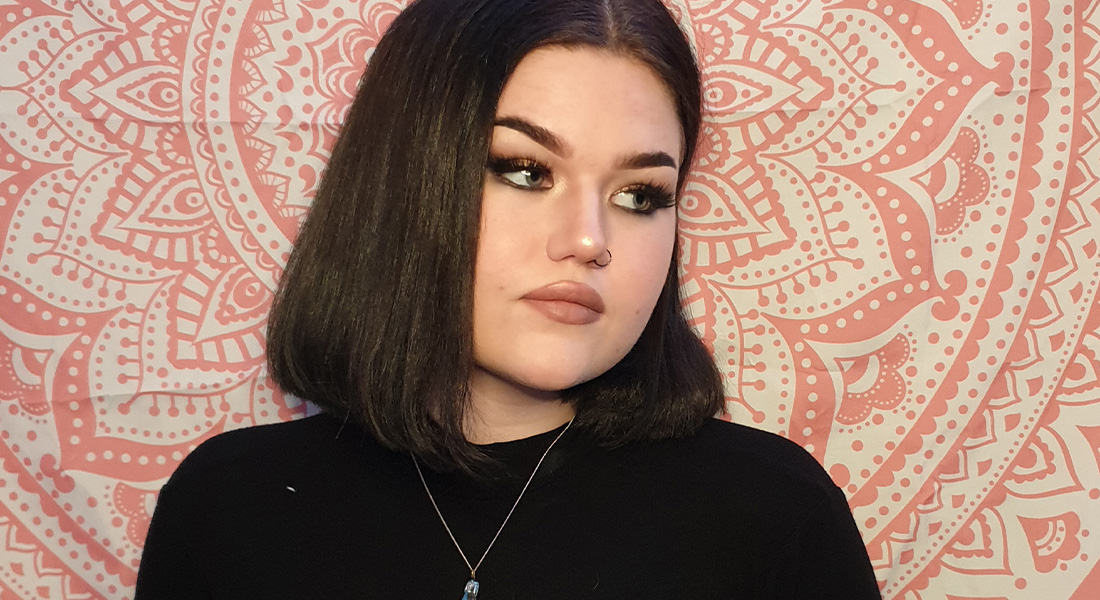 Let’s explore a little longer the acoustic side of alternative pop. This time around, it is the guitar notes and the electronic layers of Anna Mae Kelly’s latest single, “White Lies”, which captivates us. Each instrument gets to echo in reverberations, creating a complex melody and letting Anna Mae Kelly’s soulful voice express itself in a magical and in a very emotional way. “White Lies” thus beautifully tells some the difficulties one can encounter with love : being with someone that is not good for you, and how painful it can be to detach yourself from a formerly loved one.

“And all these times I was told I was never good
And I played and I cried, and I do what I could
I remember feeling like I couldn’t stand you”
– Anna Mae Kelly – “White Lies”

Anna Mae Kelly is only 17 years old, yet she has already released several singles on streaming platforms. Based in Kettering in England, she learned to play the guitar from an early age ; her unconditional passion for music started at the age of 8. She began to write her own lyrics at 13, and she released her first song at only 16.

Let’s now dive into the depths of electronic alternative pop with Christina Jewell. Definitely dark and somewhat seductive, Christina Jewell catches the listeners’ attention with “Ain’t No Supermodel”, a bittersweet song that talks about one’s need to surpass themselves to achieve their goals, especially when you are not born with a type of social privilege. Christina Jewell wrote this song following the disappointments experienced while modeling ; “Ain’t No Supermodel” sounds like a mantra to be repeated in order to prove to yourself that you are capable of achieving your goals if you decide to do so.

“I ain’t no supermodel
I ain’t no legend’s daughter
I ain’t got no million dollars
Gotta work to, work it out”
– Christina Jewell – Ain’t No Supermodel

“Ain’t No Supermodel” and Christina Jewell’s music world in general reminds us of Tricky’s early days and of the vocal prowess of Banks. The world of the Canadian artist is sultry and filled with strong messages & blues references – we are especially thinking of the tortured guitar at the beginning of the song. A music video is also available for this track, you can find it here ! 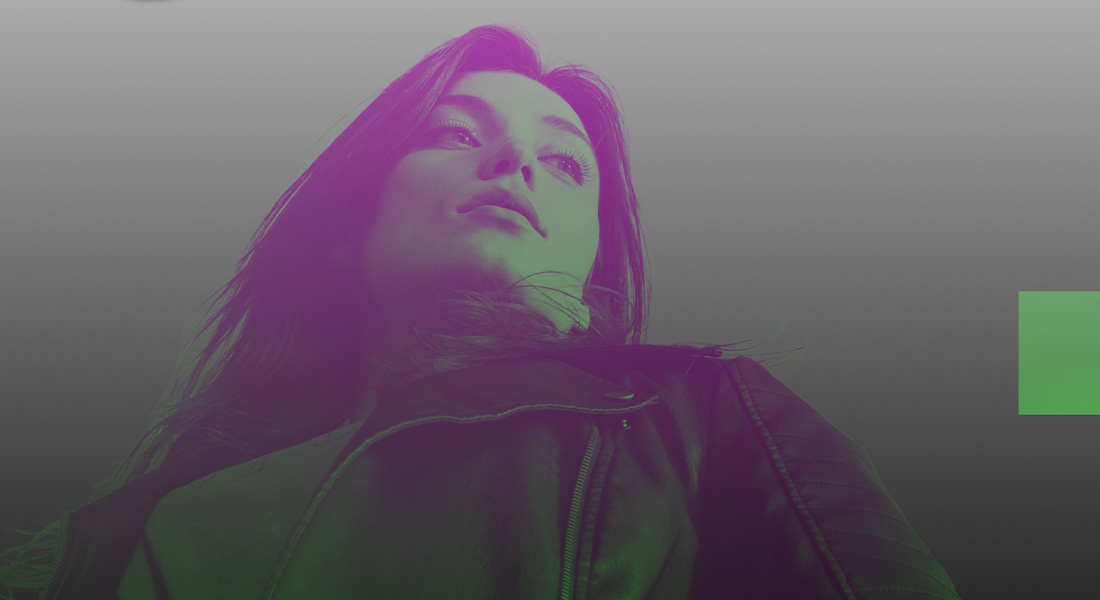 As we told you, alternative pop is a vast universe, and “Sleep” by Mystic Waxx just proves it one more time. “Sleep” is a dark song which takes inspiration both from dark pop and trip-hop music, making for a very atmospheric and contemplative track. They are strongly inspired by Portishead, and if we had to sum up what makes Mystic Waxx what they are, we’d say that their secret recipe is made of dark melodies and a high pitched, angelic, emotion-filled voice. The lyrics on their side have been inspired by unanswered questions about consciousness : a philosophical subject discussed between two chords progression.

“Beneath the surface of the world
They timelessly shiffting every soul
With every moment counted to your score
Will you return to sleep on ocean’s shore?”
– Mystic Waxx – “Sleep”

The London-based duo Mystic Waxx will release a third EP later this year, the single “Sleep” being its introduction. If you enjoyed this track, we highly recommend that you listen to their single “Tears Left To Cry” or their EP “Kayla” – more organic and bluesy than “Sleep”, they reveal another side of duo, while keeping their trip-hop vibe ! 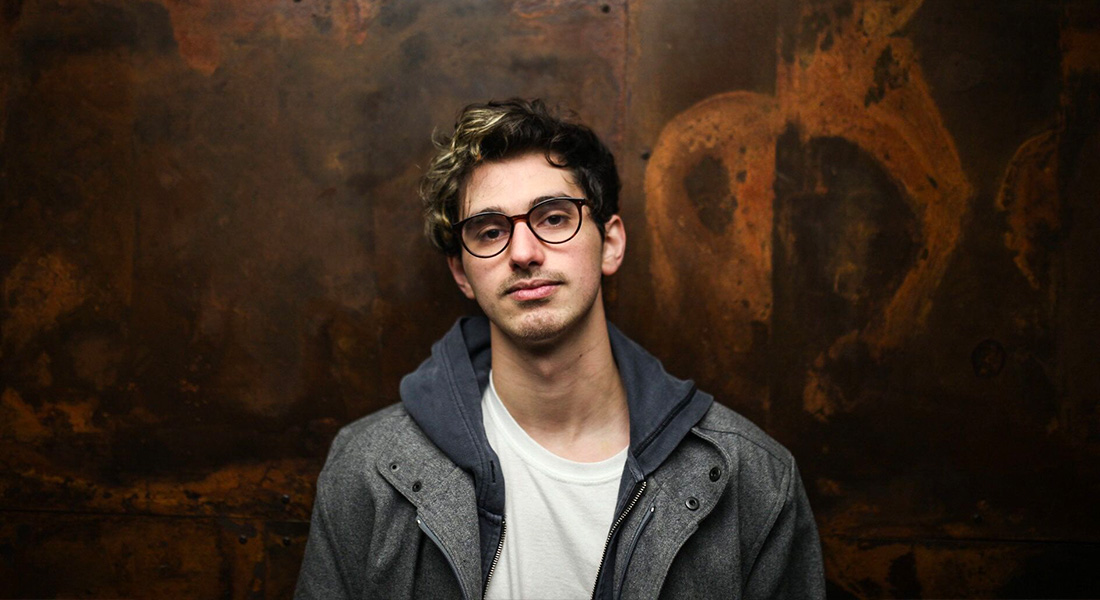 We leave trip-hop behind to meet Ouray and his electronic music universe ; our journey however still remains dreamy and metaphorical. The introduction of Ouray’s latest track “Everybody Knows” let us believe that we were going to be dealing with a calm, sweet and introspective track, however, we were quickly surprised by the drop that occurs only a few seconds after the track started ; the lyrics become suddenly jerky and the sentences collide in perfect sync with the chopped up melody that develops in the back, leaving the listener captivated and pleasantly surprised.

Ouray voluntarily lets the listener decide of the meaning of the minimalist lyrics of his tracks ; like Daft Punk, Madeon and many other electronic music producers, Ouray is very influenced by the use of samples and he lets them guide him through his composition process. It is also a way for him to express himself in a better way : by playing with bits of pre-existing tracks, he breaks them down to reassemble them and add them to his own production, allowing himself to more or less reference the producers he is inspired by. 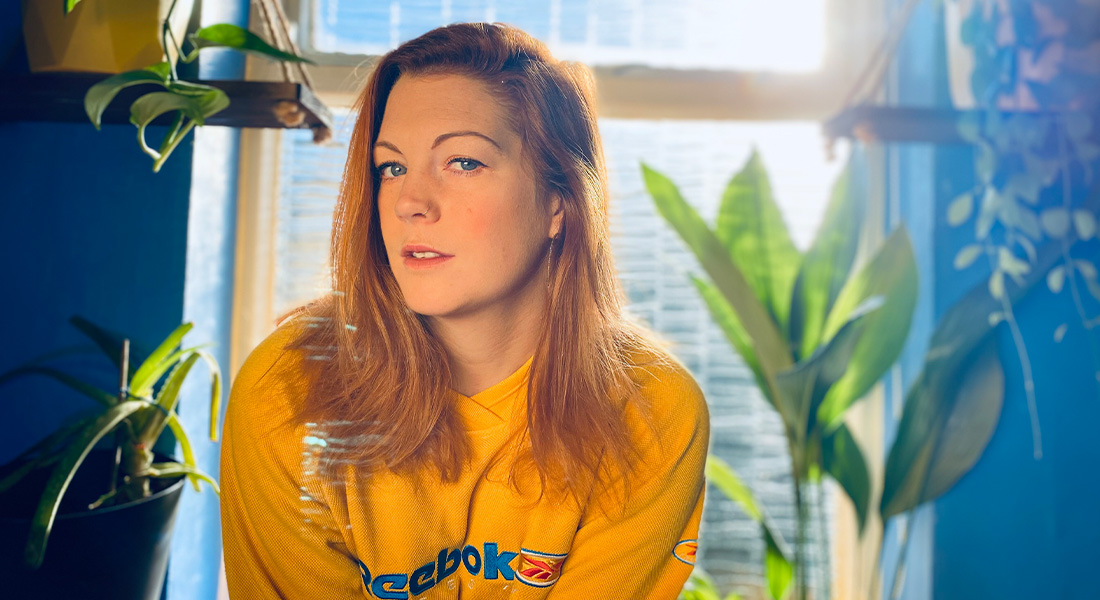 We end our curated playlist with Grace Savage’s latest single, “Rag Doll”. “Rag Doll” is delightful, upbeat and fast-paced, a recipe that allows Grace Savage to express herself with her soulful voice. Generally, what makes a track’s atmosphere is the instruments’ choice, it’s the way they have been arranged that sets the mood. This time around, it’s Savage’s voice and her lyrics’ choice that draw the listeners’ attention and create the atmosphere of the track. Indeed, she expressed herself and states her feelings for her lover, while explaining in a paradoxical way that she is unable to say the words “I love you”. “Rag Doll” is an ironic song yet full of emotions !

“Rag Doll holds a really special place in my heart. It’s kind of ironic that a song about not being able to say “I love you” turned out to be the one that helped me make the most romantic gesture of my life. I wrote this for my girlfriend a few years ago when we were first going out. I knew I had deep feelings for her but was terrified of acknowledging it and making myself vulnerable.” – Grace Savage au sujet de “Rag Doll”

Grace Savage is a British artist who had the chance to perform live before the pandemic on the prestigious stages of Glastonbury and The Great Escape, to name only a few. Her fanbase is growing day by day ; if you enjoyed “Rag Doll”, we strongly advise you to listen to “Running Under Water”, a track that allowed her to be played on BBC1 Radio the year after its release !

hauméa selects #2 is also available on our Spotify profile. If you enjoyed it, we recommend you to give a listen to our “Pop & Alternative” playlist – we regularly update it with new tracks !

Disclaimer : this playlist has been curated through MusoSoup — #SustainableCurator.