Cracki Records, an independent label that has proudly been representing the French scene for over 10 years now. They are the ones behind the successes of bands like Agar Agar, Renart or Saint DX, and have shaped the French pop scene by focusing on ever more avant-garde projects.

And just like a lot of labels & tastemakers would, Cracki Records has decided to thank all the people and artists who made the history of the label by releasing a compilation, entitled “Memories d’Elephants”, which means “Memories of an Elephant” in English. The compilation features both classic tracks that helped shape the label’s image and reworked versions of certain tracks (starting with the remix of “Lunatic Fight Jungle”, one of the most popular tracks of the parisian duo Agar Agar, reworked by Leon x Leon), as well as some unreleased tracks from artists who are close to the label’s team, and who decided to join the compilation to celebrate the event with them. On top of that, let’s not forget to mention that a few tracks have been released exclusively on this anniversary record. So let’s dive into the 27 songs & remixes of “Mémoires d’Eléphant” while appreciating what the French pop scene has to offer !

The label’s words regarding “Mémoires d’Elephant” :

10 years of music and parties already !

Cracki Records celebrates its 10th anniversary with the release of its new mega compilation “Mémoires d’Elephant # 03” !

This compilation brings together some of the titles that have marked the history of the label is also a look towards the future, and gathers within the same project artists who have always gravitated in our close environment and with whom we dreamed of collaborating.

In addition to our loyal artists, we will be able to find artists like Juan Wauters, Chassol, David Numwami, Myd, Voiski, Tryphème, Myth Syzer and even Black Devil Disco Club.

Finally “Mémoires d’Éléphant # 03” is above all a way of thanking all the people who have followed, closely or not, our label for so long and who push us to continue to develop projects that we love and that we believe in. 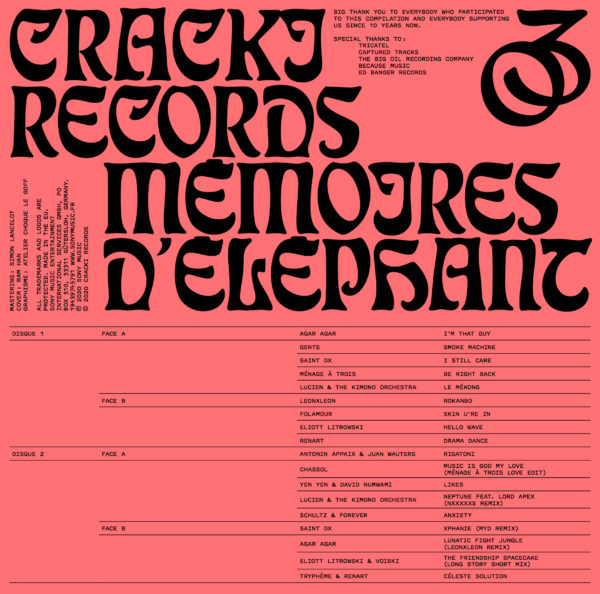