Among all of the support systems that are the most coveted by emerging artists in France, there is the FAIR, known for being the #1 support system for emerging artists on the French music scene. The FAIR, which supports and guides twice a year a series of laureates in their professional career by offering them various partnerships with members & companies of the music industry, is particularly known for its ability to highlight tomorrow’s big French-based artists – we no longer count the number of nominees who have been helped by the FAIR for the Victoires de la Musique since its launch ! And the first session of the year does not miss the mark : the 7 winners who are part of this first selection of the year have either gained momentum these past few months, or will not fail to do so since they are starting to get a lot more attention. Let’s have a look at what the FAIR offers its artists & get to know who the 7 winners are ! 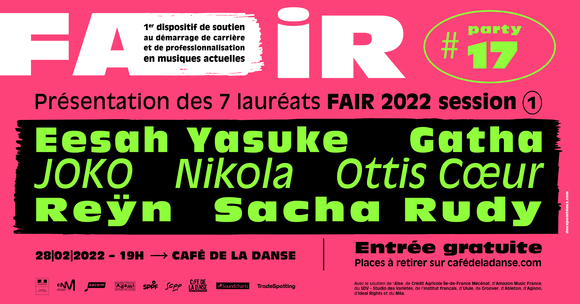 The FAIR : a support system made for casting a light on French-speaking talent & giving them the professional support they need.

Designed as a 360° support system, the FAIR accompanies artists on all aspects of their musical careers. From financial to legal support and visibility, everything has been thought out to help them go further in their career ; the partners of the FAIR are numerous and well known in independent side of the music industry – among them, there is Ideal Rights, a legal support company, as well as Tradespotting and Groover, two powerful devices in their respective fields, aka digital advertising and music promotion.

The FAIR therefore offers 5 different types of support to its winners : a financial grant that may go up to €8,000, some artistic and technical training in order to understand how to handle music production and post-production, live shows in order to get them to broaden their audience, communication support with FAIR’s partners (Tradespotting, Groover and Soundcharts), and management and legal advice for them to start out or structure their existing career.

Among all the laureates, there are lots of artists who have shaped throughout the years the French music scene – we can count among them artists like Yelle, Agoria or Louise Attaque to only name a few – which is further proof that the support system can have a powerful impact on an artist’s career.

However, a few key criteria must be met in order to benefit from the FAIR’s 360° assistance, starting with an age limit. You also have to have performed a certain number of times before applying (i.e at least 5 since the band was created) ; it is necessary to be a member of the Sacem (the French equivalent of PRS, BMI and ASCAP) and your first release must date back to 4 years at most.

Among the 7 artists that are being supported by the FAIR system this year and for this year’s first session, we have been agreeably surprised to see some well-known names of us – such as the Lille-based rapper Eesah Yasuke whom we discovered at the Crossroads Festival – but also trending artists from the French independent pop scene, like Joko or Reÿn, whose voices keep mesmerizing ever-growing crowds.

As for the new faces & names that are to be found amongst the winners, there is Gatha, a French electronic pop artist whois also a great cello player – up to the point that her cello acts like a full band member ; Nikola, one of the only two male presences in this session #1 of 2022, will surprise more than one listener with his powerful yet singular voice and his acoustic melodies played on the piano and the violin.

But it’s not just French pop that is being represented this year : the female duo Ottis Coeur will represent the romantic side of the French pop rock scene ; the English alternative scene is being represented by Sacha Rudy, who has been widely noticed for his track “Be A Man” a few years ago. We are excited to see where the FAIR will take them – it’ll start with a live show at the Café de la Danse in Paris by the end of the month !