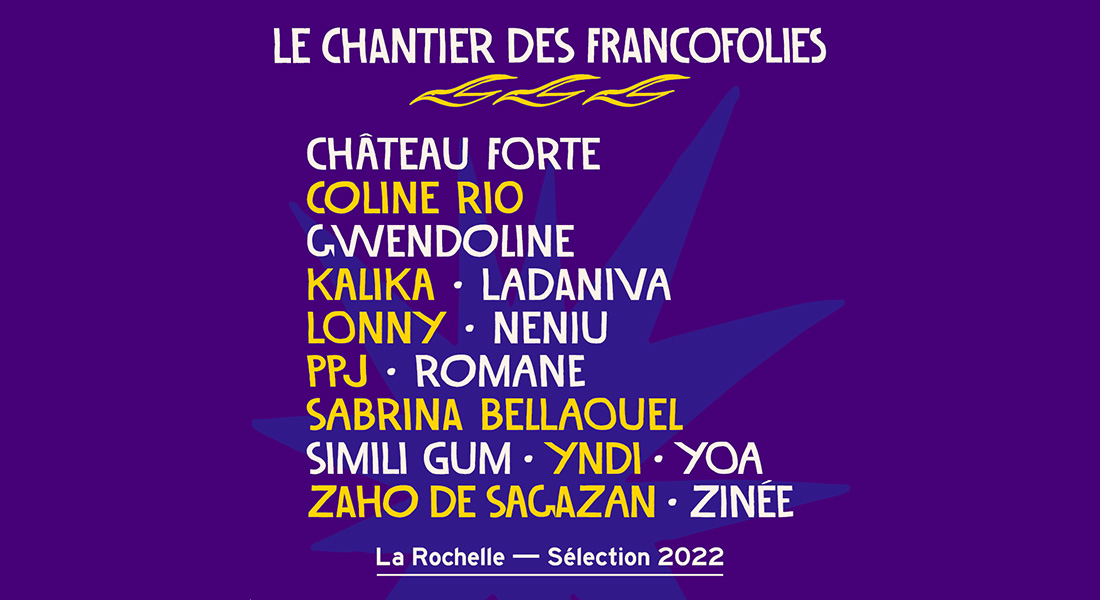 Chantier des Francofolies : the French award & support system has announced its shortlist for 2022

Les Francofolies : one of the most important festivals when it comes to showcasing the many talents of the French-speaking scene to the world. And, just like the Printemps de Bourges, another well-known French festival, the Francofolies has a side program, an award & support system built for scouting and supporting the rising talents of the French-speaking music scene : the Chantier des Francofolies, also known as the Chantier des Francos. We unveiled their 2021 selection to you last year, and we are doing the same this year by presenting the fifteen candidates in the running for this year’s grand prize !

– this year’s shortlist for the Chantier des Francofolies

The Chantier des Francofolies is an artistic accelerator that has supported emerging artists of the French-speaking music scene since 1998. Among the artists that have been supported these past few years, we count among them famous figures such as Suzane, November Ultra, Aurus, Malik Djoudi, Pomme, Juliette Armanet, and more. Moreover, this year, some former winners and candidates have even announced their nomination for the Victoires de la Musique 2022, which further establishes the reputation of the Chantier des Francofolies and its ability to cast a light on tomorrow’s main French-speaking artists.

This year’s shortlist is essentially filled with female names that we find in the running for the Chantier des Francos prize. Of the 15 candidates that are listed, 12 of them are the names of female artists – and if we count the women that are to be found in the duos and trios in the list, their number even rises to 14. It is a heartwarming number, especially given the difficulties encountered by women & gender minorities when trying to work their way up the French music scene : according to the latest survey by PRODISS, the French national union for musical and variety shows, 81% of women state that they have encountered difficulties & obstacles during their career solely because of their gender.

We therefore wish lots of beautiful things to the artists in the running this year : get to know the artists of this year’s selection in its official playlist below !